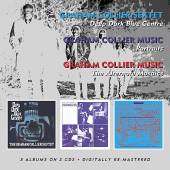 This is the second chapter in BGO's reissue program of bassist/bandleader Graham Collier's work from the late 1960s and early 1970s. It gives listeners a chance to catch up with some of the most potent British jazz from a period when the music was moving forward at a rate and without a mind for the demands of commerce. Over the course of what were once three LPs, it also plots the course of Collier's development as a composer and bandleader.

If this was music geared towards the demands of cultural enrichment it achieves that aim admirably despite the diversity of styles on offer. Thus the quasi-impressionistic tones of Deep Dark Blue Centre (Disconforme, 1967) echo the work of Gil Evans, albeit with a more rhythmically animated sense. Collier's composerly aims are aided in no small part by his sidemen, with Karl Jenkins's oboe topping things off in some of the ensembles and Dave Aaron's dry alto sax and the always deeply worthwhile trumpet of Harry Beckett outstanding in the solo stakes.

The stark theme of "El Miklos" is made deliciously melancholic by Mike Gibbs's trombone with Aaron (on flute) and Jenkins showing not only their own grasp of color but Collier's burgeoning abilities as an orchestrator. These are points borne out when the tempo goes up and such is the cumulative effect that the issue of continuity is never in any doubt, for all the many colors on the palette. The title track is a relatively more animated effort, but not to the extent that it's detrimental to the cohesion of the overall program.

Even though Collier and the band cut the original version of Mosaics (Disconforme, 1971) prior to Portraits (Disconforme, 1973), it's the latter that follows in this set. Made in 1973, it's an outstanding example of work in the modal idiom. With small groups, Collier had really telling abilities that have been banished to the past by his work with large ensembles in the intervening years, but no matter. Here he manages again to coax maximum mileage and color out of a six piece band, with John Webb's drums underscoring everything nicely.

It's not difficult to see why Collier has chosen to work so often with guitarist Ed Speight over the years. Speight's work on "And Now For Something Completely Different, Part One" is that of a player with highly singular phrasing. His tone also is something to behold, moving as it does towards the margins of jazz guitar with his use of deft picking. The suspended time at the heart of the second part of the same piece allows Speight the space to develop his solo and as per the first part. The lyrical aspect of the music is allowed free rein, aided in no small part by Dick Pearce's background figures on flugelhorn.

Now, there's a lot in a title in the case of The Alternate Mosaics, as this program is not so much another take on the reading of "Mosaics" as it was originally released, as it is a re-examining of the same material. The fact that it was recorded on the same night in the same north London pub is rendered more remarkable by how different this program is in the detail. It's conclusive proof of Collier's contention that a piece of jazz happens in real time, just once. The rolling, boiling reading of "The Alternate Mosaics Part 1 Theme 1" doffs its hat to developments on the American side of the Atlantic, and more specifically to the work of the classic John Coltrane quartet in its rhythmic intensity; but the following "The Alternate Mosaics Part 2 Theme 2" is abundant evidence of how much ground this band could cover while remaining lyrical and the restraint and touch of pianist Geoff Castle.

The fact that all this music was happening at a time when jazz was enduring some sort of commercial nadir highlights how commercial success, together with all the dubious benefits that has to offer, only very rarely goes hand-in-hand with creativity. That lesson is true even now, but what's really good about the present moment is the opportunity it affords us to be exposed to music as trenchant as this.