By EYAL HAREUVENI
April 6, 2014
Sign in to view read count 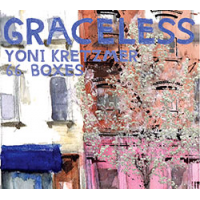 Israeli, New York-based tenor saxophonist Yoni Kretzmer returns on Graceless to an old passion of his—writing music that attempts to bridge the forward-thinking jazz from the school of sax heroes Tim Berne, Ellery Eskelin, and European jazz with elements from contemporary chamber music. Kretzmer's debut album as a leader, Yoni Kretzmer's New Dilemma (Earsay, 2009) focused on the same idea, but now with a better and varied experience and is accompanied by resourceful and opinionated musicians, he comes closer to realizing his vision.

Kretzmer's new compositions for the 66 Boxes quartet debut recording are framed within loose structures that demand open and personal improvisations and interpretations. His quartet is comprised of cellist Daniel Levin, guitarist Eyal Maoz, and drummer Andrew Drury, all of whom are experienced composers, improvisers and band leaders. Each of the five compositions progresses patiently between distinct movements with enough room for personal contribution by all four musicians. These compositions opt for balanced, collaborative interplay instead of the powerful and intense as such musicians are certainly capable of.

The extended pieces feature Kretzmer's versatility and diversity as a composer and improviser. The elliptical "Basement Song" alternates back and forth between total chaos, messy interplay, and spare lyrical articulations disturbed with heavy drumming and guitar hammering. The reworking of "New Dilemma" stresses its qualities as an open, chamber piece and demands restrained thoughtful touches from Maoz, Levin, and Drury being careful enough not to push it over the edge. The 19-minute "Leaving It To The End" begins with gentle and contemplative timbral explorations as the quartet methodically gravitates toward a dirty blues riff by Maoz, followed by the back into light tranquil reciting of the original theme repeated beautifully by Maoz. The 17-minute "One One" continues with the similar contemplative vein, but focuses on inventive and extended techniques by all; Kretzmer talks and breathes into the mouthpiece, Drury bows the cymbals and rubs the skins, while Maoz and Levin apply objects and stretch their instruments strings—until all gather around a strong theme, played majestically by Moaz on the acoustic guitar. The last, "The Day After Yesterday" structures a slow, claustrophobic, and tensed interplay that slowly opens, then gains more volume and volition until its final surprising melodic catharsis.

Graceless is another testimony to Ktretzmer's highly original ,challenging and restless musical vision.

Basement Song; New Dilemma; Leaving It To The End; One One; The Day After Yesterday.