By Doug Collette
December 12, 2007
Sign in to view read count 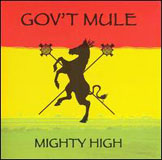 Hearing a Gov't Mule reggae album is no big surprise if you've seen the band with any regularity over the years. Interpretations and teases of Bob Marley songs sprinkle their set lists; nouveau reggae icons Spearhead with Michael Franti have been co-billed with the group frequently; and Warren Haynes' signature song, "Soulshine, has been arranged for reggae in the last year.

Germinating, no doubt, from a confluence of those circumstances, 2006's New York New Year's run, which included one night dubbed (sic) "Dub Side of the Mule, plus the unique inspirational atmosphere of late night/early morning post-recording sessions, Mighty High will appeal to devout Muleheads, not- quite-so-devout reggae fans, and anyone fascinated by production technique.

But make no mistake, Mighty High should not be considered a new Gov't Mule album, because it is not a full-length album of all new material. Rather it's a full-length (sixty-seven minutes) CD, consisting of rearranged versions of Mule material, interpretations and production of improvisations and previously recorded live tracks sculpted to suit the concept of the release. The $11.98 price point suggests much but, with liner notes by Haynes, meticulous musician and recording credits, plus an array of fine photos along with colorful stylized graphics, this is the antithesis of budget-line packaging.

Careful and repeated listening may discern a logical flow to the baker's dozen tracks of Mighty High. Gov't Mule includes no new originals, but instead revisits and reworks songs of recent vintage such as "Like Flies which, with its dub mix courtesy of High and Mighty producer Gordie Johnson, becomes "Horseflies. "Unring the Bell,' also from the preceding Mule studio album, turns up on four variations, while the oft-covered (by Mule on stage) Al Green tune, "I'm A Ram, appears in three versions.

The cover material, perhaps not surprisingly, offers the most ingenious avenues of recording, production and performance. Originally conceived for a tribute to The Band, "The Shape I'm In is as true to the spirit of New Orleans as it is Kingston, Jamaica. Gov't Mule and Johnson literally mix a live recording of The Rolling Stones' "Play with Fire with studio effects surrounding the (inevitable) appearance of Spearhead's Franti. But perhaps Otis Redding's "Hard to Handle sounds most natural on the Mighty High context; recorded last year at the Beacon with Toots Hibbert, the singing is soulful and the band is smartly augmented with a three-piece horn section, equally evoking Memphis funk as much as Jamaican skank.

As hardworking and prolific as Gov't Mule is, the release of Mighty High is nevertheless surprising, since the group also has a double DVD concert release due out in December, 2007. Grounded as it is in a genuine musical fascination of bandleader Haynes—who, from the stage, once referred to Bob Marley as "the last true prophet"— this CD is far more than just an indulgence, because it's produced with bonafide care. Though much of it carries the charged atmosphere of a good live jam, whether it satisfies a demographic broader than the Mule community is in the headphones of the beholder.

I'm A Ram (Original Mix); Rebel With A Cause; Horseflies; The Shape I'm In (Original Mix); Play With Fire; Hard To Handle; Hard To DubYa; Unblow Your Horn; Unthrow That Spear; So Ram, So Wrong Outta Shape; Reblow Your Mind; Plasticine Era.