By David Rickert
September 2, 2006
Sign in to view read count 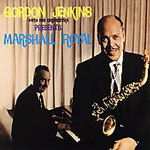 How to explain the bewitching power of sax and strings albums, especially for those who would never dare go near the easy listening section of their local music store? The best of these records, like Stan Getz's Focus (Verve, 1961) or Bird With Strings (Columbia, 1950), feature terrific arranging married to imaginative playing, reworking melodies, yet never reaching for anything too challenging. From my own perspective, these records retain a special fascination.

This particular pairing, a reissue of a 1960 recording, features a well-known arranger and a lesser-known musician working orchestral magic. Gordon Jenkins provided dignified arrangements for the likes of Frank Sinatra and Louis Armstrong, and Marshal Royal was a key member of the Basie Band who rarely recorded on his own. Jenkins' bouncy strings provide the perfect cushion for Royal's airy alto sax, as patient and elegant as Lester Young's and perfectly suited to the setting.

The opening "Caravan and "Ain't Misbehavin' are given the royal treatment, and everything seems to be shaping up nicely until we get to "Take the 'A' Train. Many a record like this has been derailed by the addition of a choir, and the chanting that occurs here wouldn't be missed. However, it's a lovely ballad treatment, startling in its beauty, that quickly overcomes this shortcoming.

The rest of the record is a fairly basic sax and strings effort, which is to say it's a pleasant listen and not too startling. Jenkins' arrangements never call attention to themselves and are given a gentle swing by the rhythm section, which includes Freddie Green on guitar. Royal sticks close to the melody, electing to add his stamp tonally and rhythmically. Jenkins contributes a handful of originals (one of them, of course, is "Goodbye ) that also display a gift for writing melodies.

Presents Marshall Royal is a terrific reissue of a record many I'm sure never knew existed. Don't expect any hot blowing, but don't look for any, either.