By Hrayr Attarian
September 11, 2021
Sign in to view read count 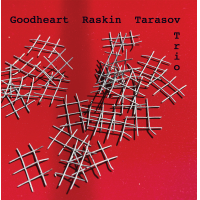 Saxophonist Jon Raskin thrives in collaborative settings. An intrepid improviser and originalist, Raskin is perhaps best known for his association with the innovative Rova Saxophone Quartet. He has, however, made several albums with other equally adventurous musicians. The 2021 Goodheart Raskin Tarasov Trio finds him in good company with pianist and sound artist Matthew Goodheart and drummer Vladimir Tarasov of the legendary Ganelin Trio,.

Recorded between 2011 and 2013 these six pieces have a remarkable thematic cohesiveness. Overall, the mood is tense and dramatic while the ensemble performances are stimulating and poetic. "Under the Ice" is an abstract yet impressionistic piece with Tarasov's resonant beats and reverberation cymbals echoing against Goodheart's tolling keys. Together they conjure up images of a cold and expectant shore. Raskin's breathy saxophone, alternating between a whisper and growl, is like an ominous wind on a dark and stormy sea.

Similarly "Starlight on Snow" is intense and cinematic. Alternating between silent pauses and collective booms, the tune takes on a passionate tone. Goodheart contributes carefully placed keys while Tarasov bursts into short and thrilling polyrhythms, and Raskin blows with fiery eloquence. Then, an ominous serenity ensues with understated beats, manipulated piano strings and soft woodwind whispers. Raskin's saxophone moans and howls over the crystalline rattle setting the stage for Tarasov's percussive solo which brims with a primal spirituality. Raskin joins Tarasov with an angular improvisation which remains lyrical as it flirts with dissonance.

The centerpiece of the recording is its concluding track, the open-ended and aptly titled "Acoustic Discourse." Raskin muses contemplatively as he explores the scales of his instrument and then mirrors Goodheart's fast-paced cascades with his agile lines. Tarasov drives the conversation with his restless thrums and thuds. Periodically the music becomes quieter with a more relaxed ambience and the band plays with a soulful swagger. These segments alternate with ones that are freer flowing and angular, as well as with solemn, ethereal exchanges. Quickly though the group moves, towards the exhilarating and thunderous finale it simmers with emotion and delights with its brilliant construct.

This intriguing and immensely satisfying work is another example of Raskin's ingenuity and talent. Goodheart and Tarasov add their own individualities to the music while simultaneously maintaining a superb synergy. The result is a provocative and captivating release and a worthy addition to discographies of all three artists.