By EYAL HAREUVENI
October 26, 2006
Sign in to view read count 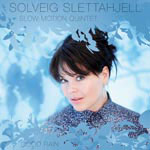 This fourth release by Norwegian vocalist Solveig Slettahjell and the Slow Motion Quintet offers another magical experience. On Good Rain, these creative and busy musicians expand the musical language that they began to explore on their previous release, Pixiedust (Curling Legs, 2005). In addition to Slettahjell, the group includes trumpeter Sjur Miljeteig, formerly of the jazz-pop-electronica outfit Jaga Jazzist and one of the leaders of the art-rock group Friko; keyboardist Morten Qvenild, who leads In The Country and Susanna and the Magical Orchestra; bassist Mats Eilertsen; and drummer Per Oddvar Johansen. The quintet flirts with pop and art-rock and even trip-hop, aiming to position the jazz vocalist as an artist again within a popular form, but avoiding banalities and without giving up its intelligent elitist aroma.

Slettahjell is faithful to her "slow motion" concept, conscious of every detail and nuance of each phrase, and her natural, leisurely alto shines throughout the eleven songs. The sonic palette of the ensemble is much more varied, enveloping Slettahjell's warm vocals with sounds that recall productions by such art-rock sonic explorers as David Sylvian or Talk Talk. The sensitive playing of all players adds vibrant layers that caress and reinforce the massages of the poetic songs.

All the songs revolve around the theme of belief, often an abstract and secular one—in Slettahjell, empowering herself after a failed relationship, or in nature—and they offer some consolation, quite often sounding melancholic. The goal? "To be lonely in a good way," as she sings in Qvenild's "Another Day." Slettahjell's innocent and modest narration of life happiness, despair, fate and hope succeeds in creating a peaceful intimacy capable of touching and melting even the greatest cynic.

Slettahjell seeks some calmness and reconciliation in "Where Do You Run To," faith in her lone self in "Another Day." She trusts fate in "Don't Look Back," draws hope from dreams in "Colour Lullabye," and strongly convinces about the joys of lovemaking on "We Were Indians." Her beautiful a cappella version of V.O. Fossett's gospel song "Do Lord" serves as an introduction to the dark, anguished, modern gospelish "My Oh My," penned by Miljeteig. On the Peder Kjellsby-penned "Good Rain" she refers to "the rain washing the stains of / Another broken day."

As on Pixiedust, Slettahjell beautifully interperts another poem by Emily Dickinson, "The Moon." The playful, minimalist version of Johnny Mercer's "P.S. I Love You," the last song on this release, offers some hopeful closure.

Where Do You Run To; Another Day; Don't Look Back; Colour Lullabye; Flawless (the muse); We were Indians; Do Lord; My Oh My; Good Rain; The Moon; P.S. I Love You.