By JEFF WINBUSH
September 19, 2009
Sign in to view read count 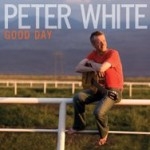 Peter White is a proficient guitarist whose albums are clean in sound and pristine in the production. It's probably not possible to even smudge the CD with a greasy fingerprint. There's so much order and control in this effort that it begs the question: does White occasionally hire out someone to sneak into his house to hide his car keys and mess up the sock drawer just to inject a little chaos in his life?

This is one confounding album. It certainly sounds great and may sell well to the legions of the guitarist's devoted fans, but it might not take them anywhere new. It's been programmed, arranged and produced to the max, and anything that remotely smacks of a spontaneous moment has been drained away. The result, Good Day, is something not unlike ordering a juicy, succulent steak and instead being served a vanilla ice cream cone; it's tasty, if not particularly filling.

White's first album of original material in four years finds him still faithfully following the formula of the smooth jazz genre. He keeps things moving along briskly with no more than one song over six minutes, providing at least ten tracks to choose from, but not more than eleven. On Good Day, White certainly doesn't place an emphasis on experimentation, improvisation or spontaneity.

The blueprint for smooth jazz success is executed with meticulous precision by White and producers Phillipe Saisse and "D.C.," (no name, only initials given). The shortcomings of the formula becomes obvious on "Love Will Find You," where Basia's superb vocal is undone by an unforgiving edit, where the song literally fades out just as it gets interesting.

White becomes slightly adventuresome with the back-to-back tracks "Temptation" and "Mission 2 Mars," which actually groove a bit and give Good Day a burst of badly needed energy. "Bright," which has enjoyed some radio airplay, is charming and recalls what another acoustic guitarist, Earl Klugh used to do regularly in his prime.

"Ramon's Revenge" is the standout showpiece for White to engage in some passionate playing. This is the kind of stuff where White gives a teasing suggestion that he's capable of doing more than the pop jazz he can now do in his sleep.

If ever there was a musician who is capable of so much more than what he settles for, it's White. He's a superior talent when it comes to what he can do with a guitar in his hands, but seems content in making pretty instrumental music. Good Day is yet another showcase for White's great technique and style, but never strays very far from his comfort zone.