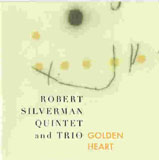 Self-produced and composed by pianist Robert Silverman, Golden Heart is one of those gems which, for a variety of reasons, seems to only come about in the NYC area. It impresses as a love letter to all the artists, clubs and fans wherein and for whom this wonderful brand of swinging jazz continues to resonate. Silverman is a pianist who is well attuned to the tempo and he hits it square on for each of these ten cuts—never too fast and never too slow, always just right.

His exquisite phrasing is presented within the context of a variety of styles, the funkiness of "Say What?, the precious blues of "Blues for ML, the hard swing of "The Search and the wonderfully paced storytelling that is a part of "The Struggle and "Starchild. For this, he has assembled a band that includes one of the world's foremost reggae session guitarists, Andy Bassford, who here performs on bass. Bassford combines with drummer Scott Hamilton to produce a rhythm section that when joined with Silverman's touch is to die for. Tenor man James "Doc Halliday provides the spirit and a slight edge to tunes that, due to their subtlety, in less capable hands would easily become clichéd and stilted. Here, they are presented with warmth and a depth that makes repeated listening a treat.

Halliday shines on the graceful paean to altoist Jackie McLean entitled "Jackie's Waltz. Trumpeter Chris Anderson lends his versatile horn to three tunes but is a standout on the aptly named tribute to the great hard bop trumpeter Lee Morgan, "The Cat. To paraphrase the Harvey Shapiro poem whose simple message solely defines the liner notes, Silverman wants the boroughs to hear his voice like he hears theirs. With Golden Heart he has succeeded and in many ways produced a love letter to the city itself.