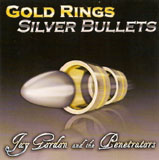 Blues/rock guitarist Jay Gordon presents sixteen of his own compositions on Gold Rings, Silver Bullets, shouting 'em out with as much power and emphasis as that which emanates from his amplifier. He's a hearty rocker who likes to drive his message home without doubt.

Originally from Charlotte, North Carolina, Gordon grew up in Chicago, hence, his loyalty to the blues. Meanwhile, he's savvy enough to know that power rock makes a statement no matter where you live. After he moved to Los Angeles in 1985, he continued to preach the blues, but in a fast and furious presentation that has won him comparisons to Jimi Hendrix and Stevie Ray Vaughan.

Gordon doesn't believe in understatement or simplicity. While his songs tell about overcoming heartache, being an outcast, partying all night long, and starting up a relationship, each one comes loaded with fire. The lyrics may be difficult to understand, but Gordon's powerhouse guitar leaves no doubt that he means business.

The Silver Bullets of this album title come flying at you like the real thing. Most of his songs proceed at such a fast pace that they've come and gone before you know it. It's like when one of those big 16-wheelers passes you out on the open road.

Several selections, however, slow it down sufficiently enough that you can kick back, dig in deep with the story at hand, and relax. "Driving Me Wild and "Loves Emotion both slow the pace in that manner. Here, Gordon is at his best, telling it like it is with a veteran's convincing authority.

Pickin' on a Piece of Wood appears biographical, as the singer/guitarist explains where the passion came from. A sample of his lyrics to this one:

My friends were chasin' baseballs
I was thinkin' about guitar
Now I'm broadcastin' the blues
and I'm headed for the stars.

Like most of the album, even this biographical story smokes with the fire of one who's not ready to lighten up. Gordon likes to drive with passion in order to make sure we get his message. And he's got the guitar chops to back up everything that he says.