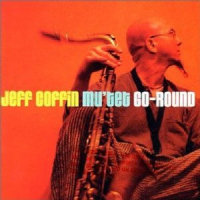 The Flecktones reedman takes a trip around the world with this stylistically rich brew of original tunes. Jeff Coffin not only continues to turn heads as one of the most impressive saxophonists in modern jazz, he exhibits some amazing compositional skills as well. He seems to draw as much inspiration from avant-garde jazzmen like Dewey Redman as from more mainstream cats like Joe Lovano, resulting in a unique performance perspective.

The first sounds heard on the disc are Coffin's ethereal wood flutes wafting an invocation into the air, beneath which an Arabic beat tumbles out. Snaky soprano sax echoes a muezzin's call, then Coffin (overdubbed on soprano and tenor) blasts through a sprightly, boppish theme alongside violist Tracy Silverman. "Future Man" of the Flecktones plays ethnic drums here, but it's not clear whether they're the real deal or a product of his Synthaxe. No matter; this track cooks, especially when Derek Jones bashes out his bass solo. Jones skulks through midnight alleys on "Walking on Thin Water," a simple but addictive riff-theme featuring muted trumpet and trombone. The beautiful "Ibrahim," perhaps a dedication to South African pianist Abdullah Ibrahim, is slow and stately all the way through. It's a rather unusual way to end such a disc, but its closure is quite comforting.

Coffin clearly loves the many aspects of jazz tradition: he offers the ubiquitous sax ballad on "Zuleikha," goes Morricone on "As in the Beginning...," struts down Bourbon Street on "Tall and Lanky" (the addition of Pat Bergeson's bass harmonica is a stroke of genius). "Dewey" is highly reminiscent of Albert Ayler's folky, suspended-time creations, while the title track is in more of an Ornette Coleman free-bop mode. His sidemen are very well chosen, keenly attuned to what the leader is seeking in his enjoyable compositions. The end result is nothing short of glorious, a must-hear.