The New Percussion Group of Amsterdam: Go Between 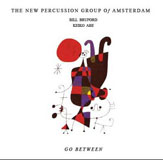 Those who think of Bill Bruford only as art rock drummer for groups including Yes and King Crimson, fusion drummer with his late-1970s group Bruford, or even (finally, after all these years) a jazz drummer with his ongoing Earthworks projects and improvisation-heavy duets with Dutch pianist Michiel Borstlap, still don't know the whole story. Those familiar with his work in the collective World Drummers Ensemble know that this iconic British percussionist has a pervasive and encyclopedic interest in anything that can be hit with a stick, something made crystal clear on this reissue of The New Percussion Group of Amsterdam's 1986 release, Go Between.

Bruford only plays on one track, the fourteen-minute title composition by Group member Rudd Wiener that, alongside Bruford's acoustic kit and percussion, features xylophone, vibraphone, marimba and bass marimba. It's a complex and episodic piece that shifts from a rhythm-heavy art rock intro to a gentler, minimalist-informed middle section, propelled forward with multiple repetitive patterns that gradually shift, Steve Reich-like, giving the piece an evocative sense of forward motion. Bolstered occasionally by Bruford's more powerful tom-toms and tympani, the two concepts come together as the tuned percussion builds into a harmonic foundation for Bruford's mathematically precise kit work, only to drop into quiet once again before the piece's conclusion—a polyrhythmic and contrapuntal tour-de-force from everyone involved.

"Redbone" is more primal; five percussionists working only with log drums ("the modern equivalent of an ancient hollow tree trunk," says the liners) and three Chinese peacock gongs, which add simple melody periodically throughout this piece by Niels Le Large who, along with Jan Pustjens, co-founded the Group, although neither of them perform on the album.

Pustjens does, however, conduct Japanese composer Minoru Miki's "Marimba Spiritual," which features guest marimba player Keiko Abe and is the closest thing to classical writing on the disc. Instead of repetitive patterns or easily discernible motifs, this complex fourteen-minute piece possesses a larger arc, with Abe's surprisingly expressive marimba supported by a variety of percussion instruments, including temple bells, temple blocks, the small but distinctive shimi-daiko and larger o-daiko drums.

The album closes with Group member Peter Prommel's "Maenaden," another long-form, through-composed piece featuring two marimbas, one bass marimba and a wealth of other percussion instruments. At various points marimba figures trade-off against untuned percussion, creating a wide array of textures while bringing sharp focus to the individual roles of the various instruments.

A remarkably compelling album that demonstrates just how musical an all-percussion album can be, Go Between sits comfortably alongside Pierre Favre's Singing Drums (ECM, 1984) and contemporary groups including the World Drummers Ensemble and So Percussion. Thanks to Bruford, then, for bringing Go Between back into print after a fifteen year absence.

About The New Percussion Group of Amsterdam