BY TREVOR MACLAREN
December 18, 2002
Sign in to view read count 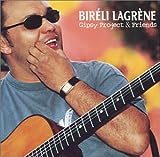 Once again Django disciple Biréli Lagrène has released an exquisite record: Gipsy Project & Friends is one of the finest guitar jazz discs of the year! Pulling together players like Florin Niculescu on violin, Hono Winterstein and Holzmano Lagrène on guitar, and the great Henri Salvador on vocals, Biréli Lagrène has mined the depths of Django's legacy. As with his past recordings, the guitarist approaches his instrument with a subtle and graceful motion that cascades in much the same way as Reinhardt. Choosing to rework many of late master's pieces would be an unthinkable task for most, but this group of players pay mind to his bright essence and the keep the gypsy spirit alive.

A finer follow-up the amazing Gipsy Project is hard to imagine. Guitar prodigy Lagrène outdoes himself on several tracks, including an outstanding reading of Reinhardt's "Babik". Listening to this disc, you can't help but be elated by Lagrène's work with Florin Niculescu. Their interplay recalls Django and Stephane Grappelli's work and proves that some musicians are truly meant to play with one another. Since the recording is a gypsy project, most of these tunes are classic material. But Lagrène does have a few a surprises as well. His version of of Mercer/Raskin's "Laura" is simply beautiful. Combining string arrangement for guitar gives the song a whole new life. With the addition of the gypsy sound, the track is stunning.

Fans of Django's style of jazz will find this CD a must have, but fans of guitar jazz will be especially intrigued. The musicianship is top notch and the arrangements are dead on.