Bill McHenry: Ghosts Of The Sun 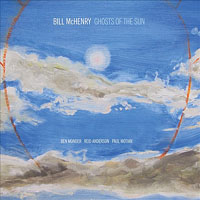 If the musical evidence on Ghosts Of The Sun is to be believed, Bill McHenry is looking to become a composer of new American Songs. The saxophonist has a distinctive flair for this type of writing, and with this delightful album he could easily begin a path to assembling a songbook not unlike what songwriters like Stephen Sondheim must have done decades ago. However, McHenry is not a librettist—at least not yet—nor has he looked for one, at least for the music on this album. But his music leaves ample room for one should he choose that path later. It is lyrical and beautiful, with a sense of romantic allusions to sweeping vistas and pastoral scenes like old America, and here the mood and tone is slightly wistful. His music is visual and he has an uncanny grasp of song form, with pieces that have a distinct beginning, middle and end. They are short, like lieder, and powerfully emotional.

Stylistically McHenry's music has a pristine quality to it. If He were a character in his short narratives, he would be a child agape at the immensity of the world around him and interacting with many other adult characters who all, for some reason, wear their hearts on their sleeves in the grand Dickensian manner. Also, stylistically he sits somewhere in between the folksy, roots style of guitarist Bill Frisell and the acute angularity of someone like that other guitarist, Pat Metheny. Furthermore, it seems to be a matter of coincidence that he is a tenor saxophonist. He might just as well have been a trumpeter, a pianist or even a violinist. This is not to suggest that he lacks character on his instrument. Quite the contrary, his voice is singular; moist and willowy, he plays with beautiful oblique intonation and his long, loping lines jump up at acute angles always taking the ear by surprise and making the already racing heart skip a beat.

The music on this album—which admittedly suggests interstellar space and the spirits therein—actually feels like a reflection of what might go on any given day on earth as it feels the warmth of the life-giving spirits from the sun. All the action seems to take place in the heartland of America, with each title telling its own story and all of them connecting in some odd kind of way, despite each chart being a complete song in itself. The beauty of everyday like with its action, reaction, intrigue and mystery and ultimate resolution is wonderfully captured with the introduction of characters in the music that might be impressionistic or expressionistic. In the end there is a narrative line and interesting characters are introduced in every one. All the musicians must share in the beauty of the music even though there are titles suggesting other people out there: "Ms. Polley," for instance, or "William III." Here it's not also about guitarist Ben Monder, bassist Reid Anderson and the great drummer, the late Paul Motian.