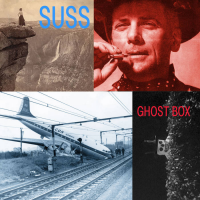 "Witchita" opens the album with a contemplative guitar theme before introducing atmospheric loops which seem to stop time—broken up by recurring mournful pedal steel guitar. "Late Night Call" begins with a gently pulsing loop. A haunting whistled tune (like the ones in composer Ennio Morricone's Western soundtracks) establishes the mood, joined by arpeggiated guitar chords and more pedal steel. "Big Sky" introduces another familiar ambient sound: the floating overdriven "skysaw" guitar of many Eno recordings. When a twangy electric guitar finally introduces the theme it's a quiet dramatic moment. "Gunfighter" adds a number of new sounds to the mix: distant voices, runaway echo effects, distorted harmonica, and a mournful Dobro. Closer "Canyonlands (Return to Wichita)" is a partial reprise of the opener, employing the same guitar theme and harmonies—a lovely way of bringing the program full circle.

At just over 35 minutes, Ghost Box is a bit short by current album standards. But it is a beautiful experience that feels complete: every "high lonesome" sound is perfectly placed.