BY NENAD GEORGIEVSKI
March 25, 2013
Sign in to view read count 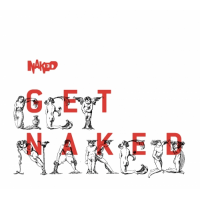 There's no limiting the band Naked to one musical genre or one concept. This band inhabits the worlds of jazz, pop, folk and everything in between, exhibiting a keen sense of what's appropriate in every setting it finds itself. Naked is a mesmerizing unit, a collective whose musical syntax continues to suggest there aren't six musicians in the band but one. Mesmerizing and softly propulsive, Naked's Get Naked speaks to a unique combination of creative concepts and influences ranging from the artists' respective globe- spanning backgrounds to their individual interests.

Get Naked is clearly a labor of love. It is a cycle of instrumentals that just like its predecessor warps lines between pop, world, jazz and rock music. Perhaps the key to their being a band to watch has to do with its sophisticated and unusual mix of harmonics with grooves and the unexpected. This effort also marks a steady growth curve. From the opening sounds of the accordion, "Ptica" is awashed in beautiful melodies and sympathetic playfulness provided by the heartbreakingly melodic violin propelled by slight bossa-nova beats and two basses. "Flea market" starts ominously with the basses playing strange lines and ambiances, and then it gradually speeds up into a jovial and festival bounce. Eventually, the catchy and lighthearted accordion turns into a sassy bump and grind.

The disc shines during many of its driving moments, too, especially "Havla," where drummer Goran Milosevic and bassists Radojkovic and Mihajlovic steer the violinist and the accordionist with quicksilver momentum. It is a joyous gypsy/folkish influenced honky-tonk stomper. The same joyous interplay and honky-tonk moments are heard on "My Ska" or "Duga Devetka." These tracks showcase the violinist's and the accordionist's sensitivity to the rhythm sections' ever evolving dynamics.

The closing "Ada Kaleh" starts with a mournful Romanian gypsy tune played on the violin and then the band breaks in with buoyed funk grooves. The same melody is carried over by the accordionist and it serves as a contrast to the grooves underneath. The el.guitar is also in contrast with everything and unnecessary although it gives a dramatic end.

The music on Get Naked gives a sense of trust and ease among the performers as they find a balance between playfulness and restraint. That also makes for a beautiful journey.