Stuart Elster Trio: Get It Right 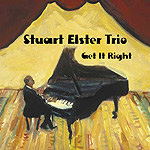 With a blast of early 1960s soul jazz, the Stuart Elster trio gets it right, which coincidentally is the title of the group's second album. It wouldn't be difficult to compare this sound to that of the Bobby Timmons trio, especially given the bouncy and infectuous riffs presented on the first portion of this album. LIke the title track, "Up In There" and "Waltz For Rachel" are just as tuneful; bassist Luther Hughes and drummer Paul Kreibich contribute to the trio effort.

The first four tracks are all Elster originals and provide the musical highlights of the album. The following piece, Horace Silver's "Juicy Lucy, serves as a springboard for a change in the set list. The remaining seven titles are from the Great American Songbook. While Elster consistently shows a facile and melodic approach to these standards, and he certainly swings Frank Loesser's "I've Never Been In Love Before and Fetter/Latouche's "Taking A Chance on Love, I kept wanting to her more of those hook-ish originals.

Perhaps I can, one day, take advantage of the fact that this same Stuart Elster trio is the "house band at the Vic Jazz Club in San Diego every Thursday night. Elster has been a Los Angeles-based musician for the past 35 years and has worked with a wide variety of pop, rock and jazz performers, as well as serving as the assistant conductor and principal keyboardist for the national companies of Dreamgirls and The Lion King.

Visit Stuart Elster on the web.

Get It Right!; It's Dark Tonight; Up In There; Waltz For Rachel; Juicy Lucy; This Is New; Willow Weep For Me; How Deep Is The Ocean; Jitterbug Waltz; I've Never Been In Love Before; You're My Thrill; Taking A Chance On Love.