By JIM SANTELLA
December 1, 2003
Sign in to view read count 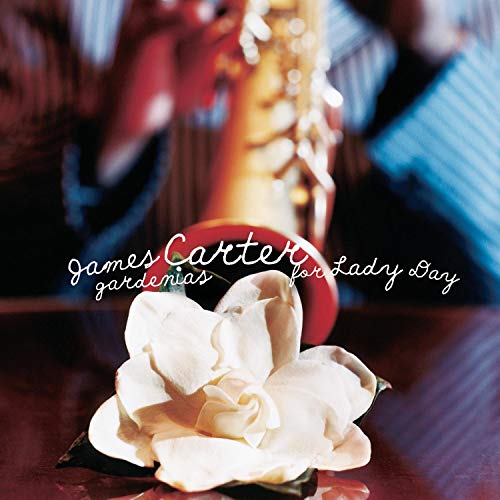 Carter's tribute to the memory of Billie Holiday weaves lyrical melodies around his own trademark enthusiasm. His desire to build upon what our jazz ancestors laid down for us has matured. Instead of far-out creations that few could understand and that many would bicker with, the 34-year-old saxophone sensation serves up an accessible program that reaches, nevertheless, into the 21st century. Stereo saxophones and deep-throated clarinets surround themes that recall the uniqueness of Lady Day. Her deep, inner strengths, her don’t-quit attitude, and her remarkable perseverance all show up in the musical arrangements that James Carter has adopted for his debut on Columbia.

John Hicks, Peter Washington and Victor Lewis support the saxophonist hand in glove. The strings add a considerable dimension. Carter wails and moans with the spirit that has driven jazz and blues for at least a century. On “I’m in a Low Down Groove,” he captures the blues essence with dueling saxophone voices (through multi-tracking). His baritone voice comes through loud and clear.

Lady Day would love what Carter has done with “Strange Fruit.” As if churning from a huge opera house, he portrays all the images that the song’s lyrics relate. Miche Braden, singing with a helpless perspective of the horror that has been going on, remains distant and emotional. He interprets well. For this track, Carter lets loose the fiery cannons that he’s been carrying with him since his arrival on the jazz scene ten years ago.

Billy Strayhorn’s “Flower” is presented as a lovely baritone saxophone ballad with strings. “Indian Summer” brings more of the same lush, Lady Day swing with Carter on soprano. He returns to the baritone for “More Than You Know,” which rolls out as yet another lush ballad in tribute. Highly recommended, Carter’s first new album in three years honors the past and blazes a trail for the future.

Gloria; Sunset; (I Wonder) Where Our Love Has Gone; I