BY DOUG COLLETTE
December 7, 2014
Sign in to view read count 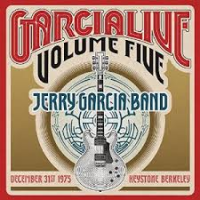 Garcia Live Volume Five begins appropriately and propitiously enough as the band slowly, inexorably coalesces around the changes of chuck Berry's "Let It Rock," weaving an insinuating rhythm and melody mix that becomes proportionately more dramatic as the leader of the band begins to sing, seeming off-mike (or perhaps he's just not turned up?), at which point the quartet drops confidently into the pocket of the groove they've only suggested to that point. John Kahn's bass pops and pulses emphatically to anchor the ensemble firmly into place, albeit allowing all the fluidity they needed to utilize the spontaneity of the moment(s) to permeate their playing.

It's a microcosm of this three-set show as captured on two discs, a performance notable as the only such concert given on a New Year's Eve, this one of 1975, further distinguished as one of the few with this particular lineup boasting the estimable skills of one Nicky Hopkins on piano. Erstwhile sideman to the Rolling Stones, the Who and Jefferson Airplane, the transplanted Brit had settled in Cali at this point and done a stint with Quicksilver Messenger Service prior to coming to shine in The Jerry Garcia Band.

"Can't stop the train..gotta let it roll on!..." Garcia sings at the end of this initial tune, almost as an aside, casually mentioning " a couple of friends ...to sit in with us," as Hopkins begins the Beatles' "Mother Nature's Son" of his own accord lasting exactly two minutes in pure instrumental form. In an instance of that rarefied atmosphere musicians speak of with such awe, as if the music is playing the band, JGB then settles with collective authority into the the blues changes of "It's No Use" that reflect the non- nonsense attitude of the lyrics.

Matthew Kelly decorates the sound their with the genuinely earthy sounds of his harp, sounding more bittersweet but no less inspired on "They Love Each Other." Further into the evening, his long-time friend Bob Weir takes a place on the stage for the duration of the second set during which time, including the fifteen minutes plus of "Catfish John," the once and future member of the Grateful Dead bolsters both the sound of the band and its improvisational inclinations as much as his peer Micky Hart who assumes the position alongside ex-Sly and The Family Stone drummer Greg Errico, himself a substitute for Garcia band regular Ron Tutt (on another gig that night with his long-time employer Elvis Presley (!).

The band becomes a different animal in this sextet form, but Jerry Garcia himself remains the main soloist in what's perhaps a definitive exposition of his unique and characteristic guitar tone (if not exploratory bent). During the clutch of nascent staples to his band's repertoire in the form of "How Sweet It is to be Loved by You," Hopkins is never far behind in support, the rippling succession of notes he elicits from the ivories virtually non-stop in their invention, but never intrusive: he knows his place in the band, perhaps satisfied as such because he'd gotten his own spotlight the hour prior on his self-composed "Pig's Boogie."(not to mention having the honor of counting down to New year's in cheerily and somewhat inebriated fashion).

The fact of the matter is everyone in the group gets their own chance to shine, but these abbreviated solo intervals don't interrupt the seamless flow of the collective interaction. Rather, the drum passage leading into a "New Year's Jam" that morphs into a snippet of "Mystery Train," (homage to The King?)thus heightening the celebratory air emanating from the stage and no doubt being reflected right back from the audience. Kudos to Betty Cantor-Jackson for capturing the goings-on with such clarity, but also to Joe Gastwirt who in both mastering and curating this archive title deserves his co-production credit.

The iconography of the graphics that adorn Garcia Live Volume Five and the inclusion of David Gans' detailed and affectionate essay in the booklet accompanying this package also stands as a tribute to the producers of this series Marc Allan and Kevin Monty. It's no small accomplishment to do perfect justice to the towering figure that is Jerry Garcia, even if the content is as deceptively down-to- earth as December 31st, Keystone Berkeley.

CD1: Let It Rock; Mother Nature's Son; It's No Use; God Save The Queen; They Love Each Other; Pig's Boogie. CD2: New Year's Countdown; How Sweet It Is (To Be Loved By You; Catfish John; Mystery Train > Drums > New Year's Jam > Mystery Train; Tore Up Over You; C.C. Rider; (I'm A) Road Runner.