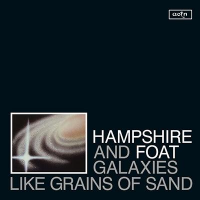 Greg Foat has been making waves on the British jazz scene for several years now with albums such as Dancers At The End Of Time prime examples of his creative originality. He's a big fan of the "golden age" of British jazz spanning the 1960s and 70s but his compositions are never derivative. Foat has teamed-up here with his mate from the Isle of Wight, Warren Hampshire whose day job is as a member of British indie band The Bees.

Opening with the Hampshire and Foat composed title track, which takes its name from the Brian Aldiss book of science fiction stories published in 1960, the mood is set with electric piano and a metronomic drum machine track, soon joined by an undercurrent of fuzzy synthesizer and acoustic guitar. There's also an attractive overlay of strings, vibraphone and tubular bells added to the mix. This is ambient jazz—a label that hardly does this music justice—at its most seductive. The music is part library, part film score and mostly Foatian in nature. It also benefits from the presence of most of Foat's regular band members and augmented by handpicked soloists on strings and woodwind and guest drummer, Clark Tracey, an in-demand stalwart of the British jazz scene. "Lullaby" is just that, a pastoral outing replete with strings and adorned by acoustic guitar and dreamy vibes. Foat himself has a showpiece on his own composition "The Solar Winds (And Cadenza)" his relaxed, fluid electric piano solo positively fluorescing. Hampshire and Foat's composition "All Washed Up" is an elegiac duet between the two protagonists in a similar cinematic vein to some of Ennio Morricone's incidental music.

Trevor Walker gives a lustrous flugelhorn solo on the mesmeric "End Song," a perfect example of classic Foat, and Walker is heard soloing again on the plaintively haunting "How The Nights Can Fly" a composition by "Elusive Butterfly" folk singer Bob Lind, who also wrote liner notes for this album. "End Song (Reprise)" restates the original melody but is now played not by the horns but by dulcet vibes and a drum machine accompaniment included as if to bookend the opening number.

The sleeve art (including the CD label) lovingly channels that of the late-lamented Argo (UK) label, home to many Michael Garrick albums, another British jazz piano hero. But it's the combination of Foat and Hampshire who have devised this mini masterpiece which is not merely memorable but timelessly endearing.

Galaxies Like Grains Of Sand; Lullaby; The Solar Winds (And Cadenza); A Long Way Home; End Song; All Washed Up; How The Nights Can Fly; End Song (Reprise).

About Hampshire And Foat