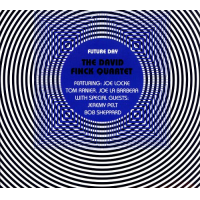 He's one of those players you may not know by name, but you've more than likely heard. In a career now nearing thirty years long, David Finck has worked with artists ranging from pianists Herbie Hancock, Steve Kuhn and Sir André Previn to singers Sinéad O'Connor, Natalie Cole and Gladys Knight. He's also done plenty of everything in between and all around these particular markers on the musical continuum. But it's only been in recent years that the bassist—now approaching fifty—has branched out from being a flexible and chameleon-like sideman with unerring instincts to become a songwriter, arranger, producer—and, with Future Day, leader.

With the countless musicians he's encountered in his travels, Finck's choices for his quartet are telling. Vibraphonist Joe Locke, pianist Tom Ranier and drummer Joe La Barbera all possess the same kind of broad reach as Finck, each capable of bringing a contemporary aesthetic to this set of originals and standards. It may be firmly centered in the mainstream; but with the kind of individual and collective commitment heard here, it's clear that accessibility needn't suggest either predictability or a lack of imagination.

As would be expected, groove is paramount. It ranges from Finck's samba-esque "Look at You"—one of two tracks to also feature tenor saxophonist Bob Sheppard and trumpeter Jeremy Pelt—and the ambling waltz-time swing of "New Valley," to Rainer's soulful "I Know" and elegant "Transparency." La Barbera's easygoing "If Not for You" is another lithe swinger, while Locke's more complex "Appointment in Orvieto" burns even harder than the version on his own Sticks and Strings (Music Eyes, 2007). Throughout, Finck and La Barbera work with the kind of ease that belies more nuanced depth.

It's one thing to play changes, it's another to get beyond the mechanics and really mean them. While none of the twelve tunes here overstay their welcome—the longest track is just over six minutes, with most in the four-to-five-minute range—there's no shortage of solo opportunities. Locke demonstrates the closest thing to perfection in solo construction this side of Gary Burton, while Ranier's relentless solo on "Appointment in Orvieto" says so much in just over a minute that anything more would be an overstatement.

Finck's tone is warm and robust, with a lyrical approach to soloing and a gorgeous arco tone that's featured on Roger Davidson's tender "Ballad for a Future Day." Locke's a capella intro to the tune is one of his most evocative solos on a disc filled with memorable moments by everyone.

La Barbera gets less solo space than the rest, but his ensemble playing—at once responsive and provocative—is outstanding; and, like Ranier, his solo on Cedar Walton's bright "Firm Roots" may be brief, but it speaks volumes. It's a fitting end to an album that may have been years in coming, but proves that Finck is more than ready to assume the role of bandleader.

I Know; New Valley; Nature Boy; Four Flags; Ballad for a Future Day; Black Eyes; Look at You; For All We Know; If Not for You; Appointment in Orvieto; Transparency; Firm Roots.