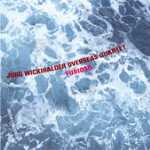 The whole issue of how deep influences run is pervasive in a lot of places here. In this set largely of free bop, leader Jurg Wickihalder's soprano sax playing often evokes the spirit of Steve Lacy in everything but the quack. It's notable from the opening "Warm-up Party" where Wickihalder and Achille Succi on bass clarinet dance around each other's line in a composition that has about the air of Herbie Nicholls. The comparison is kind of rendered pertinent by the fact that the master once penned a piece called "House Party Starting."

That said, it could all be a matter of programming. On the following "The Pocket Trumpet Man," the title referring to Don Cherry presumably, the soprano sax/bass clarinet duo manage to evoke something other than the spirits of Lacy and Eric Dolphy, and this over a hyperactive rhythm which for all the activity still manages to cohere in pleasing fashion.

When Wickihalder switches to alto sax, as he does on "Desert Voices," the matter of comparison is rendered that much more irrelevant. He has his own thing going on with that horn, and it's underscored by a much more contemplative air; if anything, he has some of Ken McIntyre's singularity. The bass-drums cartel of Mark Zubek and Kevin Zubek provide a model of colorful empathy on this one, shading the horns' lines yet at the same time being alert to all the implications of rhythmic suspension. It works a treat, the music flowering in its own way for all the predominance of a tradition of which it's self-evidently a part.

Performing a couple of Thelonious Monk compositions is however tempting fate, especially in view of Lacy's lifelong fascination with and for the man's work. "Four In One" is initially taken solo by the duo of soprano sax and bass clarinet. Wickihalder's debt to Lacy is all too apparent, although for whatever reason he seems to lack his forebear's insatiable curiosity for the music. "Played Twice" gets a whole lot closer to what could be the essence of Monk's music, though again without suggesting that the group has anything significantly new to say about it.

As a composer, Wickihalder is not without his own idiosyncrasies and these are perhaps most apparent on "The Valley," where a contemplative air comes into its own again and proceedings hint at something other than the sum total of influences. The fact that this happens only intermittently throughout a program that doesn't come anywhere near the hour mark, suggests a group caught early in its musical development.