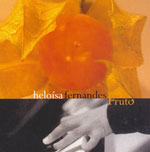 If Helo'isa Fernandes didn't exist, I think I would have to invent her. Fernandes is a Brazilian jazz pianist and composer who is equally influenced by Bill Evans and forró; she plays with great pointillist intricacy as easily as she forms great sweeping legato phrases; she sounds as confident doing her own improvisational mini-portraits as she does covering Caetano Veloso songs. Surely she can't really be real.

And yet she is, and this disc is proof. She gives herself free reign to go where she will, but somehow manages to imprint her style-of-many-styles on the listener with no sense of contradiction or worry. In 49 minutes, Fernandes manages to form a unified musical personality, even though the tracks range from "Voo," where she lets flautist Teco Cardoso blow sweetly over her Alan Broadbent-esque fills; to "Colheita," where vocal percussionist/madman Naná Vasconcelos does his beatboxing all over the place; to the meditative "Jasmim," which is funereal and somber.

"Criança" is the prettiest, because it's the longest and because the haunting melody is passed back and forth skillfully amongst Fernandes and her accompanying string duo, Cláudio Cruz and Alceu Reis. This melody mutates four or five times in nine minutes, but never really strays too far from just being beautiful and intricate and meaningful. Fernandes is not trying to be avant-garde here, nor is she aiming for the lowest common denominator. She is just being herself.

But the much more subdued title track, which comes right afterwards, is just as deep, and just as important, in half the time. And the childlike "Rosa," an older song by folk singer Pixinguinha, manages to be playful and simple even as it rambles all over the place. Fernandes' attack is tight, but her fingers are loose, and her ears are wide open. And she knows how to play with people, too: her interplay with bassist Zeca Assumpção is probably not actually telepathic, but it must be very close, as they always know right where to go before the other one makes a move.

I'm not sure that the six tiny pieces that make up the final track, "Suite das Meninas," entirely come together, and some of the longer compositions end up sounding like they're repeating themselves. But those are my only quibbles with this record. Overall, Helo'isa Fernandes clearly has a vision of what she wants to accomplish in the studio, and this is just a flat-out mission statement of her philosophy. Maybe it's not any more unusual than "Make up great songs and play the hell out of them"... but isn't that what it's all about anyway?