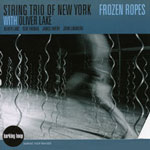 The venerable String Trio of New York, founded in 1977, is one of the jazz world's longest running avant-chamber ensembles. Co-founding guitarist James Emery and bassist John Lindberg, along with the group's most recent addition, violinist Rob Thomas, continue to balance stunning virtuosity with free-form expressionism. Featuring iconic alto saxophonist Oliver Lake as a guest artist, Frozen Ropes is a unique item in the enduring ensemble's lengthy discography. Lake proves himself an ideal companion for the trio, whose ardent textures, taut rhythms and abstruse melodic sensibilities are on a par with his own. Together, they display an awesome symbiotic rapport across a diverse set of moods.

Frozen Ropes is conceptually split into two halves with flawless track sequencing. The five pieces on the album modulate from lengthy, esoteric explorations on the first half to brief, sublime genre pieces of astonishing accessibility on the second. The opener, "Shiffs," is a sinuous web of polyphonic linearity that culminates in a rambling collective frenzy tinted with shades of the blues. A spirited arco duet between Lindberg and Thomas opens the title track before the ensemble converges on a thorny melody. Spiraling out in multiple directions, the group bustles with spastic energy over a jaunty, swinging pulse. Lake's acerbic alto burns white-hot, meshing perfectly with Emery's furious staccato acoustic guitar runs while Thomas' violin soars lithely and Lindberg's sinewy bass relentlessly holds down the bottom end. The first half of the album demonstrates the musicians' phenomenal listening skills while they navigate tricky contrapuntal lines and vigorous collective improvisation.

The second half of the record features three shorter tunes that break from the labyrinthine structures of the first. "Reminds Me" is a tender ballad highlighting Lake and Thomas' lyrical, mellifluous sides. The surprisingly traditional blues grind of "Texas Koto Blues" is enthralling on first listen. Featuring Lake's barking alto and Emery's pneumatic fretwork on soprano guitar, the tune suddenly shifts into Asiatic melancholy towards the coda. Direct, vivacious and surprising in its solemn resolution, it is the album's most affecting composition. The closer, John Coltrane's meditative "Lonnie's Lament," is suitably emotive, delivered with just the right touch of simmering fervor.

With a diverse cross-section of styles, intricate interplay and vibrant improvisation, Frozen Ropes is a discographical highlight for both the String Trio of New York and Oliver Lake. Collaborative albums are rarely this consistently rewarding.