Todd Hildreth Trio: From the Hip

BY JIM SANTELLA
December 4, 2005
Sign in to view read count 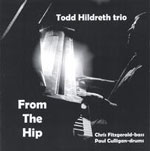 The piano trio remains one of the most viable combinations in jazz. With this unit, you can interpret as you please, and still find plenty of room for exploration. The creative process seems to never run out of ideas when piano, double bass, and drum set provide all the necessary ingredients. Of course, it's still up to the "cooks" to measure those ingredients and put them together.

The performance on Todd Hildreth's From the Hip can be enjoyed by jazz fans from all over the spectrum. His straight-ahead demeanor colors much of the album as he interprets standards and not-so-standard pieces with class. Hildreth's keyboard technique allows him to steer with clarity and sonority. There's excitement, too, as the pianist fires up driven passages and seasons them with traces of Thelonious Monk and Horace Silver.

The blues seems woven into everything that the trio puts forward. The pianist's surging motion through "Alone Together," the bassist's lyrical solo on "Wabash II," and the drummer's rolling cascades on "Black Nile," for example, serve to thoroughly coat each respective episode with blue currents. Each piece seems to build naturally to a powerfully creative climax. It's at this point that the musicians move outside the standard improvisational format and stretch their limits.

Todd Hildreth's recommended From the Hip offers something for all jazz fans and seasons the outcome with a heartfelt blues spirit.

Visit Todd Hildreth on the web.

Wabash II; Don't Let Me Down; Black Nile; Let Us Break Bread Together; Alone Together; A Day in the Life; Clint Eastwood; The Nearness of You.

Title: From the Hip | Year Released: 2005 | Record Label: Self Produced