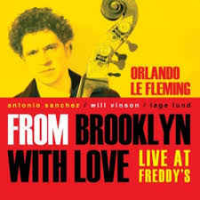 From the very first hearing it becomes clear that From Brooklyn with Love—Orlando Fleming's hard-swinging debut as a leader—is likely to be the start of a long upwardly mobile career for this young, Birmingham, England-born bassist, demonstrating all the makings of a pilot project that heralds the unfolding of a major talent with the keenest of ears, deeply expressive technique and penchant for challenge, all couched in a somewhat self-effacing personality, as Le Fleming plays with a quietness that belies a gracious doffing of the hat to his fellow musicians.

Le Fleming plays with marvelously pliable fingers, caressing the strings even when he is playing pizzicato. So a furious plucking frenzy is almost out of the question as the bassist trots, canters or even gallops elegantly through the briskest of musical passages in a voice reminiscent of Steve Swallow. Of course, Le Fleming has a singular voice, characterized by cascades of silken notes—some of which he repeats several times using a variety of pressures on the strings, and various strings at that—to gain subtle changes in pulse, time and space. Even playing quietly cannot mask this wonderful characteristic. He also uses double time and stop-time frequently, and sometimes shuffles like a good old soul from the heartland of swing, which is far from his English hometown. Although positioned in the rhythm section of his quartet, Le Fleming is one of the most melodious bassists, whose notes flutter like excited birds on the wing.

The sole writer on this album, Le Fleming displays a maturity beyond his young years. He is not afraid to experiment with time signatures, and shows that he can tackle the complexities of fast and varied pace with alacrity. Moreover, he has a fine sense of irony as he displays not only in the titles of his tunes, but also in the manner in which the develop personalities of their own. In "False Dilemma," for instance, the character appears to develop a pretentious stutter, which is nothing but a wonderful unfolding of the dichotomous nature of the very study itself. "Inevitably" develops in the same manner, almost suggesting it has nowhere to go, before the piece charges there.

Another keen aspect of the music is the manner in which Le Fleming sets up his cohorts to bind with the bass. After a longish introduction in "Rummaging for Significance," he draws guitarist Lage Lund under his wing, enabling both to negotiate the piece's subtle irony. Le Fleming does likewise with percussionist Antonio Sanchez and alto saxophonist Will Vinson, as well developing a fine three-way counterpoint in this chart and others. From Brooklyn with Love, truly augurs well for the future of this bassist and composer.