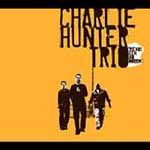 Still mining inspiration from his relocation to New York, eight-string guitar wizard Charlie Hunter returns to the trio format for Friends Seen and Unseen. The trio offers plenty of open space, though with Hunter's unique style of playing bass lines and guitar melodies simultaneously, the group can often sound like a quartet. Hunter and his partners, saxophonist John Ellis and drummer Derrek Phillips, relish the opportunity to alternately hunker down in and float around the irresistible rhythms. The result is a set of loose, but never sloppy, feel-good romps that percolate with energy while exploring the wide terrain of groove music.

The offbeat, start-and-stop movement of "One For the Kelpers" gets things started, boasting an adventurous Hunter solo that builds in intensity as Phillips swells the groove and Ellis comps. The upbeat "Freedom" offers a saxophone line oblique to Hunter's lines for effective counterpoint. The leader solos over a bubbly shuffle groove, before Phillips adds a lilting drum solo that hints at the song's melodic movement and returns it to the head. Ellis adds a growling tone to the tight unison melody of the leisurely "Lulu's Crawl" and bleats an old-timey tenor solo, with note choices approaching dissonance. His flute shifts tones for "Darkly," sounding airy over the subdued playing of Hunter and Phillips. Hunter stretches out with a gnarly sound over Phillips' up-tempo, burbling drums on "Running in Fear'" and plays a more traditional blues on "Eleven Bars for Gandhi."

Drawing influences from '70s funk, New Orleans second-line drumming, and the classic Hammond B-3 merchants, this trio certainly grooves. By shifting tempos and styles between (and within) tunes, they ensure that there is no sound-alike repetition. Instead, the trio offers an original statement that should leave you smiling—or maybe even dancing.

One for the Kelpers; Freedom Tickler; Lulu's Crawl; Darkly; Soweto's Where it's At; Running in Fear From Imaginary Assailants; Eleven Bars for Gandhi; Bonus Round; My Son the Hurricane; Moore's Alphabet