By ROBERT IANNAPOLLO
August 7, 2008
Sign in to view read count 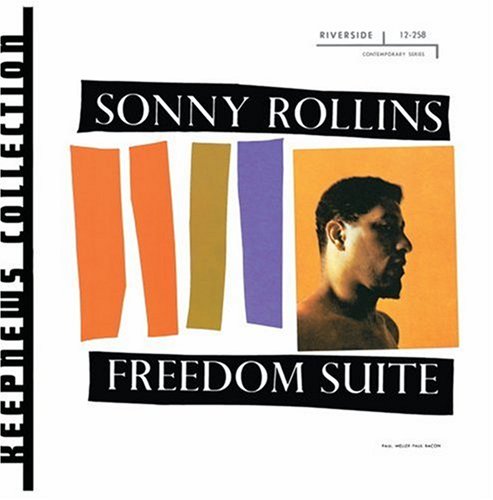 From 1955-59, it appeared that Sonny Rollins could do no wrong. One needs only to listen to the 1-2-3 punch of Saxophone Colossus, Live At The Village Vanguard or Way Out West for confirmation. Most jazz fans know these albums backwards and forwards.

One of the albums from this period that's only slightly less revered than the aforementioned triumvirate is Freedom Suite, Rollins' last recording for Riverside. Recorded as a trio (the best way to hear Rollins) with long-time collaborators Oscar Pettiford on bass and Max Roach on drums, this recording was one where Rollins was pushing at the boundaries. The title track is a side-long, five-part suite with themes that allow Rollins and his cohorts room to roam; It is surprising this piece (or at least some of its movements) hasn't become a jazz standard. The melody of the middle ballad section is stunning and the high velocity final movement could make any accomplished improviser sound good.

The second side of the original issue was a romp through four Broadway showtunes/standards that always provided fertile ground for Rollins. Although this recording has been in print on CD steadily since its reissue on OJC, here it is given a 24-bit dusting off as part of "The Keepnews Collection" reissue series. There is an additional third take of "Til There Was You" that's exclusive to this release and a Pettiford/ Roach duet on "There Will Never Be Another You" that was recorded while waiting for Rollins to show up at the studio. There's also an essay by producer Orrin Keepnews that details the vibe of the session— apparently Rollins was very, very nervous throughout which is barely detectable from the results. Though these features aren't enough to warrant an upgrade, Freedom Suite is a recording no jazz fan's home should be without.

Sonny Rollins: tenor saxophone (except for There Will Never Be Another You); Oscar Pettiford: bass; Max Roach: drums.