By Mark Sullivan
October 27, 2017
Sign in to view read count 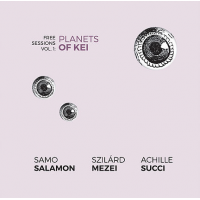 Slovenian guitar ace Samo Salamon has been recording for a long time, but he's still trying new things. This is an album of several firsts, starting with it being his first recording made entirely on acoustic guitar, as well as the first that was completely improvised. It's also his first time recording with violist Szilárd Mezei, a player Salamon had been following for a long time, waiting for the right project. In contrast, Achille Succi (bass clarinet, alto saxophone) is a longtime playing partner: he's played on eight Salamon albums, starting with the first, Ornethology (Samo Records, 2003).

Free improvisation (or impromptu performance) has been part of Samo's recent recordings. WindS (Klopotec, 2016) was a duet with pianist Stefano Battaglia which included three impromptu pieces, accounting for the bulk of the album's running time. Even his large ensemble project The Colours Suite (Clean Feed Records, 2017) concluded with a group improvisation. But this program is a full leap into improvised acoustic chamber jazz.

There are eight trio performances, beginning with the skittering, exploratory "Trio I," which finds Salamon's acoustic guitar, Mezei's viola and Succi's bass clarinet sketching out the territory. The trio speaks in a mostly gentle, abstract language which could just as easily be heard as modern chamber music: there are few obvious "jazz" stylistic elements. "Trio II" is notable for the first appearance of alto sax, while "Trio VI" features long tones during the intro, as well as an especially conversational style (and Salamon's most traditional chordal guitar accompaniment).

The program also includes several duets: two for guitar and viola, one with guitar and bass clarinet, and Samo sits out on the viola and bass clarinet duet. The album closes with the longest track, the expansive "Trio Suite." Just a guess on the title, but I think it earns the "suite" description due to the succession of contrasting musical ideas. A fitting conclusion to a successful exploration of musical freedom.