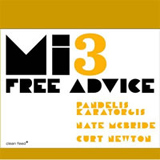 The Boston-based trio Mi3 features the talents of pianist Pandelis Karayorgis, bassist Nate McBride and drummer Curt Newton. Free Advice is the studio follow-up to their live recording We Will Make A Home For You (Clean Feed), one of 2005's most sonically audacious debuts. Invoking a wealth of traditional antecedents and sublime advancements, the trio delivers an ageless acoustic set every bit as intense as its electric debut, with even greater dynamic range.

Widely praised for its gritty electronic textures, courtesy of a heavily effects-laden Fender Rhodes, their premier was a discographical anomaly for Karayorgis, who returns to his original instrument, the grand piano on this session.

Maintaining a steady presence in the Boston free jazz scene since meeting at the New England Conservatory of Music in the early 1990s, Karayorgis, McBride and Newton have honed their interplay to virtually clairvoyant levels.

Embracing a mix of Post-War influences, Karayorgis reveals a fondness for the kinetic dissonance of Cecil Taylor, the abstruse lyricism of Thelonious Monk, the harmonic ingenuity of Andrew Hill and the knotty counterpoint of Lennie Tristano. A conceptual maverick, he weaves these various threads together with the flair of Ellington at his most adventurous.

As regular collaborators of guitarist Joe Morris and the rhythm section for saxophonist Ken Vandermark's Tripleplay trio, McBride and Newton have repeatedly demonstrated an intuitive rapport. Whether shifting meters, modulating time signatures or engaging in free form call and response, they retain control over the most skeletal of structures.

Mixing obscure masterpieces from legends like Duke Ellington ("The Mystery Song" and "Warm Valley") Hassan Ibn Ali ("Almost Like Me") and Sun Ra ("Ankhnaton") with a mix of edgy originals, the trio unveils a keen awareness of tradition that lends an historical perspective to their adventurous spirit.

Delivered with a simmering, noirish sensibility, "The Mystery Song" reveals an aspect often overlooked in the Duke's oeuvre, but it is on Hassan's angularly descending "Almost Like Me" that the trio finds true accord. Having covered "Three-Four vs. Six-Eight Four-Four Ways" on its debut, the trio again tackles the composer's layered rhythms and complex harmonic patterns, navigating the labyrinthine structure with puckish glee and deconstructive brio.

Negotiating the Monkish angles of "Who Said What When" and "Fink Sink Tink," the trio careens through quirky meters and asymmetrical melodies with vivacious delight. "Spinach Pie" and "Case In Point" employ Tristano's thorny sense of melody and halting rhythm, while the bluesy and plaintive Ellington ballad, "Warm Valley," displays a tender side of the trio.

The Mystery Song; Who Said What When; Correspondent; Almost Like Me; Warm Valley; Fink Sink Tink; Ankhnaton; Spinach Pie; Case In Point.