By Geannine Reid
January 27, 2014
Sign in to view read count 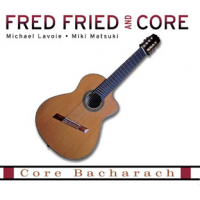 As a kid in New York, Fred Fried enjoyed everything from early rock and roll to show tunes. He remembers listening to cast albums of Oklahoma, South Pacific and West Side Story. He loved Gershwin's Rhapsody in Blue and pretended to conduct the orchestra in front of the record player. From age 12, Fried played clarinet and was in various junior high school bands and orchestras. As a teenager Fried attended New York's High School of Performing Arts as a drama major.

Although guitarist Fred Fried did not start playing the guitar until college, where he was an English major at Boston University, Fried soon became obsessed with the instrument. Growing up in New York, Fried listened to everything from early rock and roll to show tunes to cast albums of Oklahoma, South Pacific and West Side Story. In retrospect, Fried notes that, "it was very beneficial to have loved different kinds of music before becoming involved with the guitar."

After college, Fried spent five years in Los Angeles where he was able to study for six months with the great George Van Eps, the father of the 7-string guitar. The hallmarks of Van Eps' influential style were the depth, richness and complexity of his playing. "George," Fried explains, "got me thinking about the guitar in more pianistic terms and helped me greatly in acquiring the technique I would need to play music the way I heard it."

Fried went from the 7-string guitar to 8-string nylon-strung instrument, which he now plays exclusively. The guitar is tuned with a low "A" string below the low "E" and a high "A" string above the high "E" as a result the range of the guitar is expanded in both directions and the hand is able to reach a wider set of intervals without moving out of position on the fret board. Fried explains, "I got the idea from the great classical guitarist Paul Galbraith," Fried says, "it's the perfect instrument for what I like to do." Fried also holds the guitar in a unique manner with the aid of a device call the "Hoyt" (developed by Karl Hoyt) which holds the guitar in a more vertical, almost cello-like position without the use of a strap. "I find," explains Fried, "it's just a more natural way to play."

Fried has nine CDs as a leader his tenth, Core Bacharach, explores the music of Burt Bacharach. "Though people often remark about my unusual approach to the guitar," Fried clarifies, "I have never been interested in technique for its own sake. It must be in the service of a musical vision. The guitar is a polyphonic instrument and to me that is where my true feeling and passion for music lies- when voices move together, with each other or against each other, as in a dance. I have tried to be faithful to this vision both in my solo and trio recordings. The guitar for me has always been a means toward creating the music the way I would want to hear it. And at the heart of it all music is a spiritual endeavor. It's the wordless expression of the human spirit."

Core Bacharach is comprised of Fried's current working trio of Michael Lavoie on bass Miki Matsuki on the drum set. It quickly becomes obvious that Fried has taken much time and care to craft each arrangement for the eleven songs presented. "The Look of Love" begins with Fried playing the melody alone on the 8- string guitar with a combination of quiet counter lines with intelligently voiced chordal accents. The second chorus finds Fried switching to an upper register figure with the melody being restated with good intonation and phrasing by Lavoie on bass over a soft bossa rhythm by Matsuki. A nice interlude is added before the bridge to allow Fried to take the melody line and for Lavoie to join Matsuki in the bossa feel. The trio plays strategic hits together to accent specific moments in the phrase followed by another interlude which takes us to Fried's solo. Starting with mostly single notes, Fried cultivates each idea that expands higher in register and activity, culminating in quickly moving chordal passages that are accented by Matsuki's intelligent drum hits. A variation of the previous interlude is used to segue to Lavoie's bass solo, keeping the continuity of the arrangement intact and the listener engaged with the variety. Lavoie's solo starts in the upper register of the bass and methodically works its way down to the middle register for the remainder of the solo. Again, an interlude takes us to the melody. However, this time Fried keeps the melody in the upper register of the guitar with a steady current of voicings moving underneath, culminating in an ensemble figure that is repeated for the ending. The result is an inventive series of variations on a very well-known melody performed by a trio that has a very coherent and unique "sound."

"Wives and Lovers" is presented in a mid-up waltz with Matsuki's drums driving the trio and filling the melodic spaces with flurries from his drum set. The expanded range of the guitar is put to good use by Fried's wide voicings under the melody. The feel is relaxed for the start of Fried's solo statement, with all three slowly building back to the moving waltz feel and some nice rhythmic work from Fried. Each chorus is built until Lavoie's solo, where Fried and Matsuki give space for Lavoie's musical statement. The melody is given a very nice pedal point over which Fried's creative voicings are again utilized to the fullest. The full harmonic possibilities of the extended range instrument can be heard on the solo rendition of "Alfie." With interweaving counterpoint and lush bass notes, Fried takes the melody through many variations and harmonic colors. The many layers of harmony are clearly conveyed in a very musical manner. In a time when many musicians are playing faster, Fried seems to be very much at home to stick to his roots and be able to carve out a niche for himself by playing laid back, enjoyable music that is more digestible by the general public than the fast and furious approach taken by so many guitarists. Fried's playing throughout the project is harmonically sophisticated and musically expressive, while putting forth a fine collection of Bacharach interpretations.

I Say a Little Prayer; The Look of Love; Walk on By; Wives and Lovers; Make It Easy On Yourself; What's New Pussycat?;A House is Not a Home; This Guy's in Love With You; What the World Needs Now is Love; Anyone Wh Had a Heart; Alfie.