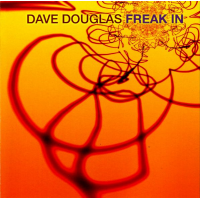 Wherever the boundaries used to be, they no longer exist. Trumpeter Dave Douglas doesn't believe in that sort of thing, anyway. The eclectic mix on Freak In represents yet another departure for Douglas, the most exciting record he's made in his career as a leader. The heady stew includes swing, hard bop, mellow jazz, Indian tablas, loose funk, deep rock grooves, electronics, and helter-skelter abandon. Douglas gained a reputation in John Zorn's school of postmodern reconstruction, but his recordings to date have had a thematic focus. His recent Witness (Bluebird, 2001) and The Infinite (Bluebird, 2002) were strong critical favorites, each mining the modern jazz zone—beyond bop headed into fusion and free. This record may piss too many people off. Who cares.

Of the twelve tunes on the record, "Black Rock Park" best illustrates the breadth of Freak In and the clever ways Douglas chooses to combine styles. It launches with a punchy blues groove led by Marc Ribot's guitar, riding over spare (acoustic) drums. The guitarist briefly heads into shredding rock territory before coming together with Douglas for his statement of a simple climaxing theme. As retro keyboards slip in, saxophonist Chris Speed lands an adventurous bop-oriented solo. Another solo from Douglas, then it's back to the theme and out. The approach lies somewhere between Miles Davis's idea of jazz/rock fusion and John Zorn's conscious stylistic eclecticism. But unlike Zorn's jumpy postmodern bent, this record seeks to blend things together into a coherent, logical flow.

Douglas recruited a surprising variety of musicians for the date, dominated by New York's avant-garde insider circle. The electronic/percussion department lends texture and groove reinforcement, while guitarist Marc Ribot exploits his ability to set the group on fire. Douglas himself travels through a remarkable range of tone on his instrument—begone Miles Davis comparisons!

It's very important to point out that, whatever the range of material on this record, Freak In remains coherent all the way. That's a real feat given the circumstances, and a strong incentive for open-minded jazz lovers of all stripes. This is the boldest record Dave Douglas has ever made. And his best, which is saying a lot.

Visit Dave Douglas and Bluebird Jazz on the web.