Frank van Berkel: New Programmer at Amsterdam's Bimhuis is Committed to Serve and to Curate 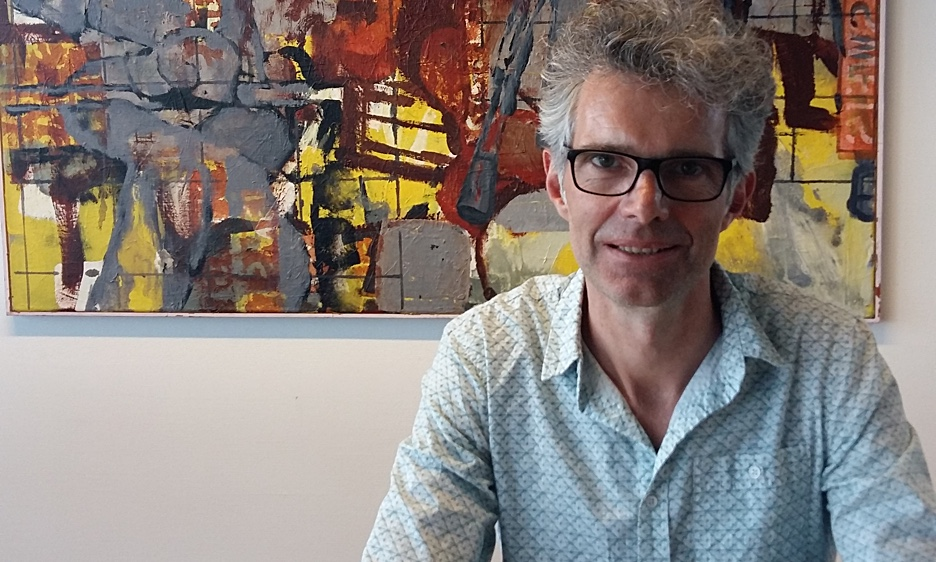 It’s a real honor to serve the best musicians in the world and to be able to curate new programs.

Frank van Berkel, the new Programmer at the Bimhuis, Amsterdam's premier jazz club, is no stranger to the music world. He started out as a musician, double bass/bass guitar, and played many venues back in the '80s and '90s, including Amsterdam's rock palace Paradiso and the Bimhuis, with different bands, that included Nine Tobs, Remo Tobs, The Schismatics and the Berkel band. "I was a musician who started organizing and promoting concerts because making a living as a musician is a tough one. In the bands I played, I was often the one doing the booking, taking care of the money and serving as tour manager." He eventually became program director of the Jazz International Foundation in Rotterdam, a post he held for nearly 12 years, though he still remains involved. "My tasks were focused on new music and production at the popular concert hall De Doelen and LantarenVenster jazz club. We collaborated with a lot of festivals and venues, promoting improvised jazz, pop, contemporary, as well as theatre and dance."

Van Berkel never thought he'd wind up programming the greatest jazz club and taking over the post of local legend Huub van Riel, the programmer and artistic director of the "Bim" for the last four decades. "I have always been a great admirer of Huub, and I want to build on his work and continue to offer a stage for the Dutch scene. But we are also an international stage presenting today's happening jazz art. It's a real honor to serve the best musicians in the world and to be able to curate new programs." "

The Bimhuis is world famous for its location, facilities, audience, and last but not least, it's program. Van Berkel proudly elaborates: "The venue is beautifully designed with a pleasant room with the best possible ambiance to stage jazz and improvised music. And I shouldn't forget to mention the team, which is absolutely superb in handling everything necessary for a concert with the highest level of quality. The connection with Muziekgebouw aan 't IJ, the contemporary music venue (on the lower level), makes it possible to combine audiences and artistic cross-overs. The location of both venues offers fabulous views of the city center and of passing freighters, cruise ships, and sailboats. I feel like a boy in a candy store." He says that he never intended to have a career as a jazz programmer, "if one could call it a career. My assignment is to present a variety of today's jazz of top artistic quality and to develop new audiences. The current generation of young jazz musicians is a very vital one and the Amsterdam improvisation scene is very active as well. In the spring we had Ravi Coltrane, with the Ralph Alessi quintet, which was not so easy for everyone to listen to, but very intense. Plus, we booked some young cats in early June with a Belgian jazz trio Dans Dans, focusing on dance and electronic music."

"I like mixing things up. Nowadays the musicians don't think like they did in the '50s. They are more influenced by other genres: classical, electronic, pop, even heavy metal. They don't think about a walking bass, or the traditional jazz style built around a standard, with a chorus, soloes, and the jazz language with blue notes and trading fours. The new generation sometimes uses it or makes new things about it, and that's what I like and find very interesting. They don't work very dogmatic. Anything can happen as long as it's pure. They're looking for adventure, walking on new paths, connecting to the audience, with exploration, invention, and an element of surprise. Jazz is live music. It's made instantly. We want the Bimhuis to be the place where live music can come to full force and develop as an art form. But the Bimhuis is also a place where connections between different social classes, generations, cultures, and music scenes are being made. It's not just for the happy few." Presenting and developing jazz and improvised music is our 'reason for being.' We get funding from the city of Amsterdam to make a program for a local as well as a national audience. There should be as many people included as possible, all within the limits of our profile of jazz and improvised music.

Nowadays jazz has a wide stretch and I love to extend limits and explore the genres. Talent development and building new audiences is most important to reach our goal because to survive as a relevant venue signifies not only to keep up with the trends but also to create the future." As we speak, a sound check is going on in the background for a jazz competition that evening among young musicians. We listen for a while and van Berkel gets back to the subject of programming. "Today there is a large offer of musicians who want to play, and the scene has commercialized too, with many agents offering their artists. The challenge in programming is to make a good pick out of the enormous amount of offers and to present it in the right manner. But there is more to it. The art of programming is making special or exceptional combinations to reach out to new audiences or creating circumstances for artists to develop new material and present it to our audience. It's also about taking artistic risks and curating chances for new inventions. That's the most creative part of programming and where art starts to develop. This is more our goal then just booking concerts, filling the hall and paying the bills. Still, we can't fulfill every plan or book any artist. Every musician wants to play here, but we can't offer everyone a gig. Cultural diversity and gender balance aren't obligations. For me, they are just natural."

When I ask who's on his wish list, he replies "Brad Mehldau, except he was already booked. Bassist Omer Avital was not on the roster, so I booked him for early spring, as well as Vijay Iyer and Craig Taborn. In November we have trumpeter Amir ElSaffar and his 17-piece ensemble, the Rivers of Sound Orchestra. They play improvised music connected to jazz, or whatever is called jazz nowadays. That's kind of a dream to have this big group." He says that "the wish list question is not an easy one, because most artists who have been really relevant, have played at the Bimhuis. Huub did a good job here. Of course, I can think of some celebrated musicians who have never played at the Bimhuis, and who would be a dream to have here, if at all feasible. Like Chick Corea or Keith Jarrett, who would play in the larger venue downstairs. A crazy dream would be to have a piano trio marathon. but also an October Meeting 2.0 and to discover new talent, like Huub had always done."

The Bimhuis has traditionally been closed in summer months, but van Berkel confirms, "We intend to present a summer program in the future, for tourists as well as locals." The Rotterdam native commutes from his home base to Amsterdam during the week on the fast train, and spends his time listening, traveling to various festivals around the world. "It's not easy keeping up with everything, because there is a lot going on. The only way is to work hard, listen well and have my tentacles well spread through a wide range network, which took years to build and which is still growing."