By Mark Corroto
November 22, 2009
Sign in to view read count 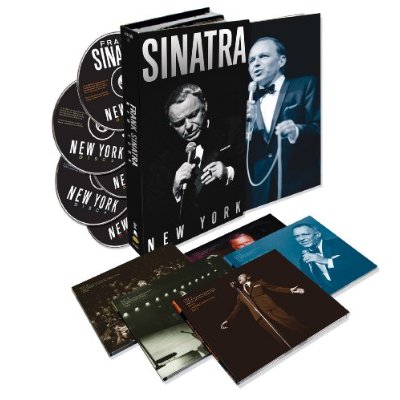 The true icons of American music, and there are only a few, include Louis Armstrong, Bob Dylan and Frank Sinatra. Their art changed the way we listen to music, and probably more important, their personal style made a deep impression on American culture. Of Armstrong, Dylan and Sinatra, it is without a doubt Sinatra, "Ol' Blue Eyes," who continues to be the epitome of style. His career spanned nearly 60 years and included not only music but film, politics and civil rights.

The five-disc box set Sinatra: New York is a collection of previously unheard live performances at New York City venues from 1955 to 1990, spread over four audio CDs and a DVD. For the hardcore fan the 71 tracks are more of the coveted grail, while for the curious music fan the occasionally unpolished Sinatra is fascinating. Kind of like reading from a president's diaries.

The quality of sound increases as the timeline moves forward. It begins in 1955 with a radio broadcast of Tommy Dorsey's 20th anniversary at the Manhattan Center. The big band era was over, but listeners and even Sinatra seem to pine of the old days. Sinatra's golden voice is quite evident, as he falls back into being just one of the boys in the band. Fast forward to 1963 and Sinatra, with pianist Skitch Henderson, performs at the United Nations. This intimate perspective might be the highlight of the box, as his voice (and energy) carries the performance. Even though the sound isn't perfect, Sinatra's rendition of Cole Porter's "I Get A Kick Out Of You" is Sinatra so very relaxed and informal.

Following a short retirement in 1971, at age 55, Sinatra released Ol' Blue Eye Is Back (Reprise, 1973) and appeared at Carnegie Hall and Madison Square Garden in 1974. Of the two dates the Garden is superior as things seem to click better between the adoring audience and the singer. Sinatra by this time reverts to spoken passages, but can still belt out his lines when called for. Like with rock stars, listeners aren't expecting an Enrico Caruso performance, they want the Sinatra expression. Like Dylan, Sinatra is as much about style in 1970s, 1980s and 1990s as he is about substance. And where his voice is not as strong on "There Used To Be A Ballpark," as it once was, the articulation and expression leave no doubt that he was a great communicator.

Disc 4 continues with a 1984 performance at Carnegie Hall and a 1990 date at Radio City Music Hall. Both sessions feature hipper and harder swinging backing bands than the other live dates. Perhaps the musicians, under the direction of Joe Parnello at Carnegie Hall and Frank Sinatra, Jr. at Radio City, were utilized to carry the somewhat diminished skills of the singer. The audiences didn't seem to mind, and Sinatra had the time of his life hamming it up a bit on "Strangers In The Night." The singer invites us to party with him here, whispering a jazz blessing to the history of "Mack The Knife." He explains to the crowd that he is proud to be a saloon singer.

He was, indeed, more than a saloon singer. The previously unseen DVD recorded in 1980 at Carnegie Hall brings all the disparate parts together in this set. Sinatra seems pleased not only with the adoration, but to be entertaining folks. He is a master at work, and the crowd doesn't care that the popular songsmith of the 1940s, the jazz singer of the 1950s and 1960s has lost a few steps. He is there and we are members of his Rat Pack for an evening.

Tracks: Introductions: Martin Block and Tommy Dorsey; I'll Never Smile Again; Oh! Look At Me Now; This Love Of Mine; Too Marvelous For Words; They Can't Take That Away From Me; I Have Dreamed; Monologue; A Foggy Day; My Heart Stood Still; I Get A Kick Out Of You.

Tracks: Overture: It Was A Very Good Year/All The Way/My Kind Of Town; The Lady Is A Tramp; I Get A Kick Out Of You; What Are You Doing The Rest Of Your Life?; Bad, Bad Leroy Brown; Let Me Try Again (Laisse Moi Le Temps); Send In The Clowns; My Kind Of Town; Monologue; Autumn In New York; If; I've Got You Under My Skin; Angel Eyes; The House I Live In; You Are The Sunshine Of My Life; My Way; My Way.

Tracks: Fly Me To The Moon; Luck Be A Lady; This Is All I Ask; Come Rain Or Come Shine; Monologue; My Way; Teach Me Tonight; Pennies From Heaven; For Once In My Life; Strangers In The Night; Monologue; Mack The Knife; Summer Wind; Theme From New York, New York; Good-Bye.

Tracks: I've Got The World On A String; The Best Is Yet To Come; The Lady Is A Tramp; When Your Lover Has Gone; This Is All I Ask; I've Got You Under My Skin; Summer Me, Winter Me; Street Of Dreams; Medley: The Gal That Got Away/It Never Entered My Mind; I Can't Get Started; Send In The Clowns; Come Fly With Me; Guess I'll Hang My Tears Out To Dry; You And Me (We Wanted It All); The Song Is You; Theme From New York, New York.