By Troy Collins
September 5, 2006
Sign in to view read count 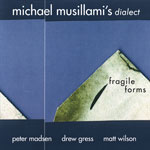 Fragile Forms is the debut of Dialect, Michael Musillami's new all-star quartet. The undersung guitarist, well-known for his adventurous and highly consistent Playscape Recordings label, recruited an impressive array of talent for this session. Musillami's previous recording, 2005's muscular Dachau (Playscape), featured his core trio with a few invited guests, including pianist Peter Madsen, who also appears here. Where Dachau was dominated by bristling energy, Fragile Forms, while not as delicate as its title suggests, is a far more measured and dynamic album.

All leaders in their own right, Musillami's collaborators navigate these expansive compositions with focused dedication and exemplary group interaction. Firebrand pianist Peter Madsen is well known for his work with Musillami and bassist Mario Pavone. Dependable bassist Drew Gress has long labored in the ensembles of Tim Berne and like-minded Downtown NYC artists, coming into his own on 2005's magnificent 7 Black Butterflies (Premonition). Finally gaining well-deserved recognition, the mercurial Matt Wilson is the ubiquitous drummer of choice for players in the know.

Why Musillami, a critical favorite, continues to fly under mainstream radar is anyone's guess. Rejecting the trappings of popular music (electronic effects, distortion, etc.), his approach to jazz guitar is straight, but never constrained. Possessing a rich, hollow-body tone and lightning-quick, angular phrasing, his singular aesthetic charts a serpentine course from Grant Green to Joe Morris. His writing blends pithy melodies and intricate arrangements with magnanimous group interplay and adventurous improvisations that are among the finest new music can offer.

From the delicate, heart-on-sleeve balladry of "Emmett Spencer" and the jaunty post bop bounce of "Seven Blend" to the stomping avant blues breakdown of "Ernie the Neck," Musillami and company explore a plethora of moods and styles on a set of compositions both new and old.

"Beijing" is reprised from the album of the same name, here an open-ended form with a loose-limbed, propulsive rhythm and subtle Asiatic flourishes. The assertive title track employs a punchy stop-start rhythm and a labyrinthine, staccato head melody to instigate the members of the quartet into a series of unaccompanied cadenzas, testing their mettle, one by one, with abstract gusto.

Brisk bop verticality and mellifluent impressionism exist side by side, sometimes in the same piece. Indicative of the session's dynamic range, "Brooms" and "Discreet Plucking" alternate between blistering intensity and nuanced restraint; supporting solo declarations ranging from trenchant affirmation to muted finesse.

Another example of Musillami's ever-expanding versatility as both a writer and soloist, Fragile Forms explores the fine line between freewheeling, off-the-cuff improvisation and heady, structurally sound writing. This album is not just for jazz guitar fans, but for creative music fans of all stripes.