By NICK MILLEVOI
November 5, 2010
Sign in to view read count 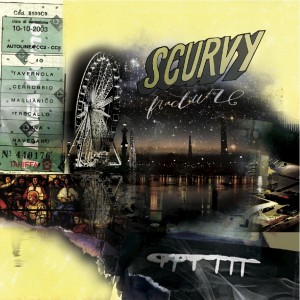 It is no news that prog rock is thriving. There is a healthy scene of underground bands that embrace heavy riffing and odd-meters, and run them through a variety of experiments. New York saxophonist Johnny Butler has gotten in on it too, and presents his unique version with Fracture, by his quintet, Scurvy.

With Scurvy, Butler makes an avant-garde jazz attack on prog rock, where heavy vamps and extreme feedback abound to make for a noisy assault. Butler writes in a no-frills style that combines the heaviness of modern prog bands with lush chords and soaring melodies. Butler and trombonist Ryan Snow amplify their horns to bolster their power against the heavy-hitting of guitarist Adam Caine, bassist Rus Wimbish, and drummer Jason Nazary. All of the soloing naturally heads toward energetic extremes, as stomp box-soaked horns and guitar wail in dissonant ecstasy.

One of the unifying musical themes on Fracture is Butler's compositional use of the unison riff, employing the device on several of the album's tracks. Rather than feel repetitious, Butler makes unique use of this device in each piece. The group is locked in unison for all of "Chime In," but this tight groove is surrounded with harsh textures of feedback coming from Butler and Snow's electrified horns. "Jenny Found A Hole" begins with a unison group riff, after which Butler plays a soaring and triumphant melody over an epic rock vamp. The track ends with Caine, Wimbish, and Nazary laying hard into the main theme, as Butler and Snow scream jagged lines of chaos into their horns.

Caine plays two duets on the album: with Snow on "Snowcaine"; and with Butler on "Side A Is Dead." On "Snowcaine," the guitarist's note choices, combined with his pitch-shifting and the trombonist's screaming attack, provide claustrophobic results that only develop from the most aggressive improvisations. "Side A Is Dead" is a heavily effected, spaced-out nightmare,with Butler and Caine making frantic electronic noise, and the saxophonist's feedback flowing over wavy guitar chords before the two descend into a deep drone, never to return.