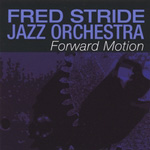 It takes a lot of self-confidence, not to mention talent, to compose a four-part Concerto for Jazz Orchestra that strives to paint a musical picture of certain kinds of machinery, but that is what Fred Stride has ventured to do on Forward Motion, the second half of which is devoted to Machina, a four-part suite commissioned by John Korsrud and the Hard Rubber Orchestra. Thanks in part to his perceptive notes, it's clear what Stride had in mind; whether the listener welcomes the concept or finds it musically agreeable is another matter.

In any case, one must concede that Stride's Vancouver-based ensemble unravels his elaborate charts with machine-like precision, adeptly underlining every nuance and shading while making certain that the assorted changes in tempo are squarely on the mark. Machina's opening movement comprises two parts: "Input, depicting "a type of computational machine, and "Process, which concerns itself with "the manipulation of data. Flugel Brad Turner solos on Part 1, guitarist Daryl Jahnke and trombonist Dennis Esson on Part 2. The second movement, "Colossus, portrays "very large machinery with very large solos to match by baritone saxophonist Mike Braverman and tubaist Brad Muirhead. The third movement, "Sound, delineates a mysterious machine that "can move abruptly from the softest to the loudest sound, while the final movement, "Velocity, is, as its name suggests, concerned with "machinery that is capable of tremendous speeds. Alto Campbell Ryga, trombonist Rod Murray and bassist Andre Lachance share center stage on "Sound, tenors Jon Bentley and Alvin Cornista on "Velocity.

The first half of the album, albeit comparably thematic, is explicitly more orthodox and accessible. The vigorous "Opposition Party, Stride writes, "is an attempt to depict the Canadian parliamentary system in musical terms (it's actually more conciliatory than the description implies). "Gently Swaying, a Latin chart in 7/4, speaks for itself, while "Floatation [sic] Device is an exercise in varying tempos, "A Few Shades Darker an extended blues with a "thick and somewhat dark texture, "Oddly Enough a rhythmic charmer that uses clarinets instead of saxophones in the ensemble passages (and on which clarinetist Tom Colclough sparkles with pianist Ross Taggart and drummer Bernie Arai). Tenors Bentley and Cornista engage in a lively debate on "Opposition Party, while Bentley, Colclough (alto) and flugel Tom Shorthouse are able protagonists on "Swaying, Ryga (alto) and Turner (trumpet) on "Device, Esson and trumpeter Derry Byrne on "Shades.

There's not a lot of ear candy on Forward Motion—Stride hasn't made things easy by aiming low—but discerning and open-minded listeners will uncover music that is both pleasurable and rewarding.