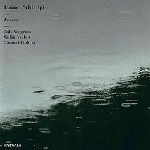 Bassist Daniel Schläppi, whose previous release was Indian Summer (Catwalk, 2006) with guitarist Tomas Sauter, establishes himself as both a composer of note and someone who can bring together fine players and get the best from them with Forces.

Wogram is a master of such techniques as talking through his instrument, getting split harmonics and many other sounds, both high and low. Vallon is a very exciting player who injects much forward energy into every note and phrase that he plays, whether he's soloing or accompanying.

Rohrer is an inventive drummer who is very attentive to detail, working well with Schläppi as the rhythm section. A very secure player, Schläppi does not play many long solos but is clearly the leader, and is solid throughout.

In a sense, Vallon steals the record. He is a stylistic chameleon, which, with a lesser player, might diffuse his impact. Here, however, this means that the core that is Vallon—the energy, clarity, wit and depth—comes through, regardless of the kind of music he is playing.

His two compositions, "Low" and "Une Année Après," could not be more different. The former has the feel of group improvisation as its introduction floats along with many different piano sounds, squealing cymbals and ponderous bass notes. The main motive is played with the odd sound of a detuned piano, and this is followed with low trombone moans and soft percussion. The latter is a rather large scale, very beautiful work that builds relentlessly into an intensely romantic piece that will completely fill your room at its peak.

None of this is meant to demean the compositional contributions of Rohrer or Schläppi. Each piece is unique and demonstrates compositional prowess, the ability of the players to adjust to a piece's personality and, through it all, the group's cohesiveness. "Far Out Blues" is just that, and might remind some of Charles Mingus' "Goodbye Pork Pie Hat" in that it has a blues feel, but cannot be called a blues.

Wogram did not compose anything, though he's listed as a player on the group improvisations, shining on the improvisational "Undersea 3" and the Schläppi composition "Eldridge Old Men."

From the traditional "The Water Is Wide" to the lighter "Playground" and the improvisational "Underseas," Schläppi and the band display the highest degree of creativity, generating excitement while having fun at the same time.