Yelfris Valdes: For The Ones

By PHILLIP WOOLEVER
October 29, 2019
Sign in to view read count 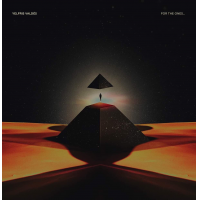 Available on vinyl or digitally, this energetic hybrid offers a scintillating selection of Valdes' Cuban influences melded with electronics, trance and a range of themes crossing from Africa and the Middle East to the London club scene. Atypical instruments create cosmic sprinkles of percolating percussion; the project is an appropriate bookend to Christian Scott aTunde Adjuah's similarly rooted Ancestral Recall.

The introductory "Canto Congo" employs Valdes' voice in an a cappella opening before "Aceleyo Ana," performed in the Yoruba language. There is a stark, modern jazz foundation over bubbling electronics but listeners definitely aren't in Kansas City anymore.

"Maktub" is one of the album's strongest cuts, typifying Valdes' ability to suggest clear compositional perimeters while exploring mysterious, multi-nuanced motifs. The piece features Simo Lagnawi on vocals. For added spice, Lagnawi plays the guembri, a three-stringed lute historically made from a log and camel skin, and qraqeb, an iron castanet. Meanwhile, Valdes uses the flugelhorn to blend time and geography into a pulse which might make granite statues dance.

"Red Eclipse" leans further into electronics with flugelhorn over multi-layered rhythms and intricate percussive accents in a searching narrative which yields plenty of tempo and treasure. "Carmen" is a short, touching ballad with only stark trumpet, soft vocal shadows plus well-hidden effects.

"Full Moon" is another standout, this one a sultry selection behind Mondou Toure doing Wulu vocals, with further effects on layered beats that evolve into a funky stew. Toure also performs striking vocals on "Ancestry," a cloudy keyboard excursion through cascading cymbals on the cut which comes closest to mainstream jazz forms.

"For the Ones Still Living" features solo horn in an upbeat, bugle type melody which builds on a theme comprising just four taps on what sounds like a small chime but provides plenty of space which should trigger personal significance for different ears.

There are appropriate baseline beats amidst swirling synths on "After Sly," inspired by Valdes' esteem for the iconic Jamaican Mr. Dunbar. The piece also harkens to sketches by Tomasz Stanko, prior to Valdes' closing vocals.

On "Worlds," powerful lyrics spoken by Carmen Martorell are an adaptation from Albert Camus, and the music rises like a hopeful dawn amidst statements like "In the midst of tears I found there was within me an invincible smile." Whether or not the song is meant as an anthem for the cumulative recording, it's a beautiful sentiment.

There is more than enough positive energy and musicianship here to create many invincible smiles, and everyone should be anxious to hear what Valdes comes up with next in his vision of the new Cuban sound. This is a very inspired and inspiring artist.

Title: For The Ones | Year Released: 2019 | Record Label: Musica Macondo