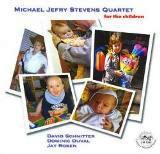 This release in the Cadence Jazz Historical Series (recorded in February 1995) is full of surprises, none greater than the successful intertwining of a former Jazz Messenger with one of the premier free-jazz rhythm teams. Saxophonist David Schnitter isn't the best-known of the Messengers tenormen, having joined the outfit during the comparative down-time of the 1970s. But since then he has built a reputation as a solid, reliable improviser. Dominic Duval and Jay Rosen often function as the "house rhythm section" of sorts for CIMP Records, Cadence Jazz' sister label. Michael Jefry Stevens, the leader, pianist and composer, is well-respected for his facility in crossing jazz' many divides. The four men's unique pedigrees come together exceptionally well in this fine release.

Stevens' compositions are uniformly interesting, often compelling. The dense urgency of "Specific Gravity" draws us in immediately, and the pinpoint accuracy of the players within the complex rhythmic structure is worthy of praise. Schnitter fairly burns, sometimes in a deceptively laid-back manner, on "Henderson" (dedicated to Joe) and approaches tearfulness on "Sadness of the Madness."

A third of the way through the set, the band sets aside edgy inventiveness to have fun with pure blues on "The Hunt." Stevens' playing here showcases a different side of the man, betraying some really hot funk chops. "Sunny's Song" and the title track are simple, reflective ballads of remarkable beauty, while "Patato's Song" gives Rosen the chance to stretch out on a frisky Latin rhythm. He and Schnitter duet for the first little while; demonstrating a deep intuitiveness. The tenor man is often inspired to head off into George Adams territory, scurrying furiously through torrents of notes.

Of all the wondrous recent releases from the Cadence family, this one may come the closest to reflecting the pure love of jazz music that has inspired its artists and producers. Exceptional.