By Geannine Reid
October 18, 2018
Sign in to view read count 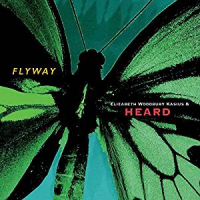 Elizabeth Woodbury Kasius burst onto the scene, or so it seemed, with Karibu (Self Produced, 2010) when, in fact, it was the leader's sophomore outing. Her debut, Water Music (Self Produced), was released in 2008 but seemed to fall into obscurity. The group Heard, who has shared the bill with Kasius on each release, has continued to evolve into much more of a collaborative ensemble rather than simply as a leader's namesake, and with the release of Flyway (2018), the band's most daring offering to date, this evolution is ever-present. Heard's sound combines the talents of Jonathan Greene on woodwinds and vocals, Bobby Kendall on bass, Brian Melick lending his percussion skills and Zorkie Nelson adding his amazing vocal prowess and percussion knowledge, along with bandleader Woodbury Kasius on piano, keyboard, percussion and vocals.

"Market Song" begins with a hip bass groove that Kasius orchestrates into an elated, groovy melody. After the instrumental theme, the vocal melody enters, with elements straight from Africa. Heard is a group adept in bringing the world sound and amalgamating jazz elements. Greene's solo is befitting to the style, melodic and passionate. Kasius' keyboard solo is atmospheric and continues the celebratory notion. She and Nelson are brilliant composers, freely crossing cultural and musical boundaries to create open-hearted concepts of world jazz combined with African, Moroccan, Arabic and Gnawan influences. The players on this date are also a testament to the vision of Heard. The unit conveys the composition with heart and masterful performances.

A lot of character has gone into the melodies. On "Cotes Des Neiges," the woodwinds exhibit this trait especially, with glissandos and trills bringing out the character of the melodies, offering expressive and defining performances. It is a light, festive number that has a lovely piano solo by Woodbury Kasius, in which she shows she not only has a strong sense of time and melody but chops to spare. Greene's solo is vivid, and the band lays down serious grooves that are multilayered but never overcrowded. They always provide an enjoyably consistent pulse road map, a cornerstone to the success of Kasius' music, which articulates clarity of time, melody, form and orchestration colors. Add her passion and the band's heart and that is why her music is so magical.

From the compositions to the group sound, as a collective Heard possesses an engaging and uplifting sound. Moods shift and the heart lifts, and isn't that what music is all about, the transformation of emotions, through the vehicle of that most universal language: music?