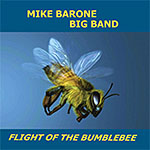 Big band leader, composer, arranger and trombonist Mike Barone notes, on the jacket of Flight Of The Bumblebee, that "Rimsky-Korsakov is turning over in his grave as we speak, or maybe he isn't." One thing is for sure, the energy level of this band is enough to raise the dead. The band is flying high on every tune of this live big band offering.

The majority of Flight Of The Bumblebee's twelve songs are Barone originals, with the exception of the RImsky-Korsakov title track and "Avalon," by Al Jolson, Buddy DeSylva and Vincent Rose. All of the compositions are hard hitting, heavy swinging tunes. Some may start out pretty, as in "The Other Half," or even in jazz waltz mode, like "Put Your Arms Around Me, Honey," but in typical Barone fashion, he throws in a catch, time shift or just pure fire.

Other tunes that swing hard include "Limes Away" and "Sprung Time," featuring Lewis' cooking trumpet solo. The tune also features a fresh-sounding baritone solo by Brian Williams, swinging hot and heavy with bebop sensibilities. Bob Leatherbarrow's drumming keeps the band in the groove, while bassist David Tranchina is solid throughout. Flight Of The Bumblebee is another fine offering from a tight, well led band that puts it all out there.

Flight Of The Bumblebee; Easy Does It; Exceptionally Moist; Trottin'; The Other Half ; Lobbers No More; Put Your Arms Around Me, Honey; Limes Away; Slow Walkin' ; Minus Five ; Sprung Time ; Avalon.