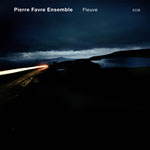 It's hard to imagine that a group as bottom-heavy as percussionist Pierre Favre's new ensemble could actually sound light and ethereal. But Fleuve does just that. With a septet featuring two basses, tuba/serpent, percussion and, at times, bass clarinet, there's no shortage of warmth and depth. But with guitar, harp and soprano saxophone fleshing out the middle and top end, Fleuve manages to have both weight and an airy ambience that works, in no small part, due to Favre's carefully crafted compositions and the kind of sonic transparency that's long been a defining aspect of the ECM aesthetic.

Favre's writing often occupies no specific temporal space. There are elements of Renaissance and Baroque music in the blended textures, and intertwining melodies of harp, soprano saxophone, guitar and serpent on "Decors," but Favre's deeply resonant percussion gives it a forward motion that comes from either another era or locale. "Fire Red—Gas Blue—Ghost Green" bears a tenuous Middle-to-Far Eastern flavor while, at the same time, presenting a more expansive landscape and subtly persistent backdrop for solos from guitarist Philipp Schaufelberger and bass clarinetist Frank Kroll.

Favre has always demonstrated a remarkable ability to make his instruments sing. A composer who combines longer form with ample integrated space for his band mates to explore, Favre's fine ear has been honed through evolving texture, movement and melody from a wide range of percussion instruments spanning the entire dynamic spectrum. While he doesn't completely desert the more rhythmic aspect of his instruments—"Reflet Sud," for example, moves inexorably and insistently forward —he remains a melodic equal alongside the other members of the ensemble.

Fleuve surpasses the not inconsiderable achievements of Favre's all-percussion Singing Drums (ECM, 1984) and relatively more conventionally configured Window Steps (ECM, 1996) through its breadth of texture and greater capacity for orchestration, despite its still small size. There are those who believe that percussionists don't make compelling composers and/or bandleaders. Favre's small but significant body of work for ECM lays waste to any such claims, with Fleuve the best argument yet.