BY EDWARD BLANCO
December 18, 2011
Sign in to view read count 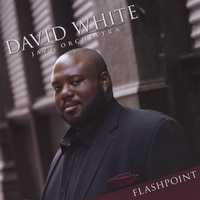 Trombonist, composer and bandleader David White has been building a reputation in New York's vibrant jazz scene since arriving in 1999. The David White Quintet has become a fixture at various venues throughout the New York City area, and in 2007, he formed the seventeen-piece David White Jazz Orchestra, securing a standing engagement at Greenwich Village's Garage Restaurant and Café. Flashpoint is the ensemble's debut recording, presenting nine White original compositions with the leader's arrangement of Duke Ellington's "David Danced Before the Lord With All His Might" opening the set.

With Ellington being the bandleader White most admires, his rendition of the icon's standard is infused with a toe-tapping tempo, inspiring, as he states, a "certain...animation and playfulness" into the arrangement resulting in a lively outcome. The lovely slow ballad of "Eyes Closed," features the bandleader on a soft trombone solo, with pianist Nick Console and tenor saxophonist Sam Dillon also weighing in with respective lines. The full measure of the band comes into play on "Love in a Blue Time" providing brassy accompaniment to a solid alto solo from Andrew Gould on one of the outstanding big band charts of the set.

"Secrets" comes alive with a mighty sound from the horns in a powerful introduction to an essentially gentle piece highlighting a wonderful solo performance from the trombonist. After graduation from college, White taught public school in the Bronx and penned " I Have a Bad Feeling About This," a truly swinging affair perhaps providing flashpoint memories and his apprehension of that situation. White's "I'll See You in Court" takes some interesting turns, from flashy to bluesy and from mellow to muscular in texture.

The last two selections are dedications to family, with "First Lullaby" written for the trombonist's son Gabriel, while the finale, "Mister Shepherd's Blues," is a tribute to the memory of his grandfather, closing the set in bluesy fashion. For this debut, White successfully cultivates a swinging and mellow sound, featuring dynamic solo performances from a quality group of players. The fine orchestrations, entertaining charts and a distinctive sound are hallmarks of Flashpoint—all in keeping with the tradition of contemporary big band music.

David Danced Before the Lord With All His Might; Eyes Closed; Love in a Blue Time; First Light; Secrets;I Have a Bad Feeling About This; Pandora; I'll See You in Court; First Lullaby; Mister Shepherd's Blues.