BY BRIDGET A. ARNWINE
October 5, 2005
Sign in to view read count 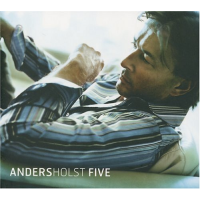 Swedish-born musician Anders Holst delivers a unique combination of smooth instrumentals and heartfelt lyrics on Five. Holst, who cowrote and coproduced four of these five songs, has been dubbed the Sting of Stockholm, most likely for his comparable vocal delivery. But Holst also shares Sting's penchant for recruiting talented musicians of different musical backgrounds who are willing to give a bit of themselves in order to create a whole song.

Holst features 22 musicians on Five—quite a few, considering that there are only five songs totalling nineteen minutes. Saxophonists David Wilczewski and smooth jazz icon Gerald Albright perform on "Love Me Like A River" and "Until the End of Time," respectively. Celebrated smooth jazz guitarist Paul Jackson, Jr. makes an appearance on "Until the End of Time." Mats Bystrom plays keyboards, Wurlitzer, or piano on all five songs; he also serves as a coproducer. Drummer Olle Dahlstadt performs on "Anfield Road" and Per Lindvall on the other four tracks. Some of the other instruments include violin, viola, cello, bass, guitar, organ, glockenspiel, and flute.

Initially all those players may seem a bit excessive, but the instruments and the interplay among the musicians work so well that at times it sounds as if Holst is singing over a prerecorded track. There is nothing overwhelming or complicated about the music; actually, it sounds very clean—like it was intended to serve as the backdrop to a really good story—and that is what makes the songs work.

The experience that comes through in each song's lyrics also works well. Holst sings about struggle and growth, love and disillusionment, loneliness and acceptance. His lyrics are the perfect accompaniment to the music, because he is a musician's songwriter. Neither singer nor musicians overshadow each other on this recording, both existing together as one cohesive unit.

Five could have been more interesting if there were a more obvious jazz element, but what Holst has created does fit him very well.

Never Look Back; Love Me Like A River; Anfield Road; Verrazano Bridge; Until the End of Time.

Bridget A. Arnwine is a member of the Jazz Journalists Association.