Joe Tex: First On The Dial 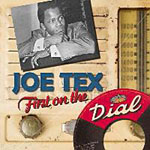 Joe Tex had some thirty hits with the Dial label and his earliest efforts for it are collected here. His was a soul voice that lacked both the grit of Otis Redding and James Carr's depth, which ensured that his ability to move was dependent on the quality of his material. He was a songwriter with a huge output, and with one exception here everything comes from his pen.

The earliest sides are representative of a talent still in the forming. "The Only Girl (I've Ever Loved)" is perhaps as much tinged by country and western as it is soul. Tex's way with the song is persuasive enough, but the up-tempo "Hand Shakin' Love Makin' Girl Talkin' Son Of A Gun From Next Door," complete with sub "Yakety Yak" sax is hardly the sort of thing worthy of his burgeoning vocal authority.

He brings that to the maudlin on "I Let Her Get Away," the earliest incidence here of Tex getting the better of indifferent material, even to the point of making something other than hokum of the spoken word section. As evidence of the artist as work in progress, it won't withstand any more than the slightest beating, but with something like "I Wanna Be Free" the evidence is of singer and song coming together in a manner that only happens infrequently. Tex seems to phrase slightly behind the beat, but that doesn't result in any unresolved tension. It's not difficult to see why the cut might be a hit with dancers, at least on the British side of the Atlantic, especially as Tex also brings his own personal grit to bear.

If proof were needed that in Tex's case it was never a matter of endless killers, then "One Giant Step" is it. The backing vocals, inessential as they are, carry more than an echo of those on Irma Thomas's far more telling reading of "Anyone Who Knows What Love Is (Will Understand)" while a rather sloppy production ensures that the comparison results in Tex losing out on a major scale.

But then along comes "Say Thank You" a few tracks later, where a relatively sparse production, tympani interjections aside, allows Tex to deliver as effective a slice of Southern Soul as you're ever likely to hear. That point is made again and in equally unequivocal terms on "Don't Give Up" where an arrangement that manages to be both full and lean grants Tex the room to do his thing. On this occasion he doesn't waste the opportunity, which bears out the point made above about his ability to move.

Only Girl I've Ever Loved; Hand Shakin' Love Makin' Girl Talkin' Son Of A Gun From Next Door; Popeye Johnny; Meet Me In The Church; Be Your Own Judge; I Let Her Get Away; Peck; Someone To Take Your Place; I Should Have Kissed You More; I Wanna Be Free; Blood's Thicker Than Water; What Should I Do; One Giant Step; The Rib; Say Thank You; Looking For My Pig; Old Time Lover; I'd Rather Have You; I Had A Good Home But I Left (part 1); I Had A Good Home But I Left (part 2); Build Your Love On A Solid Foundation; I'll Make Everyday Christmas (For My Woman); Don't Give Up; Tell Me Right Now; There Is A Girl.