By Mark Sullivan
September 18, 2017
Sign in to view read count 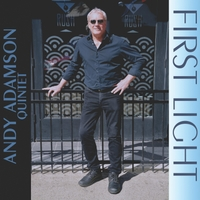 Self-taught keyboardist/composer Andy Adamson hails from Ann Arbor, Michigan. He has been active in Ann Arbor and Detroit for over fifty years, playing many styles of music: Cuban folk music with Melodioso, jump blues with Dick Siegel & His Ministers of Melody, funk with Norma Jean Bell and the All Stars, rhythm and blues with the Ann Arbor band F.U.B.A.R., disco and rock with Detroit club bands, and of course jazz. Flavors of all those genres find their way into the original music played by his jazz quintet on this date.

The title tune kicks off the set with jagged rhythms and an acoustic quartet. After an expansive piano solo from the leader, saxophonist Dan Bennett makes a strong statement, followed by brief solos from bassist Brennan Andes and drummer Jonathan Taylor—an exciting introduction to the core band. "Corner Store" is an anthemic Latin-flavored tune that introduces trumpeter Ross Huff, giving the front line a fuller sound. It's a great addition, but unfortunately he joined the band near the end of the recording session and appears on only two tracks. It really would be more accurate to describe it as the Andy Adamson Quartet.

Two tracks go into fusion territory, but in a way that blends stylistically with the more straight ahead material. "Twilight in the Making" is a trio tune. Adamson grounds it in acoustic piano (as he does on the entire album), but it features a frenetic electric piano solo over a rock vamp that recalls the Soft Machine. The ascending theme of "Transparent Dream" gives way to another fusion vamp with synthesizer and saxophone solos. And another pair of tracks are in a fully traditional acoustic jazz vein. The ballad "Once Through the Changes" is a piano trio, while Bennett joins in for "High Street Roundabout." The album ends with the jubilant Latin sound of "Sunny Side Up," the leader contributing another fine solo and Huff shining on his trumpet solo.

First Light; Corner Store; Twilight in the Making; Velvet Sunset; Divided We Stand; Once Through the Changes; High Street Roundabout; Transparent Dream; Sunny Side Up.