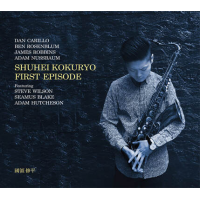 For a debut album, First Episode displays a remarkable amount of self-confidence and inventiveness from its creator.

Shuhei Kokuryo is an accomplished jazz saxophonist from Nagoya City, Japan. Heavily inspired by Charlie Parker, First Episode was written and recorded in New York wherein Kokuryo had his skills sharpened by Seamus Blake, who even co-wrote the track "Mirage" on the record. First Episode is an astonishing example of passion, vision, and timeless production aesthetics, channeling the elegance of the genre.

More importantly, Kokuryo is a truly excellent performer, who showcases his emotionally and technically driven style on the saxophone. Each of his phrases is beautifully nuanced, and he also focuses on the quality of the tone itself. His saxophone feels warm and full-bodied, serving as a perfect lead instrument while also adding great depth to each song. From the opening track, "Meteors," down to the stellar "Mynority," Kokuryo manages to surprise and impress with his inventive arrangements. One of the best tracks is "Ocean Parkway," particularly due to its pleasant dynamics as well as the unique vision that inspired the composition.

The sound of this album is charming and old-fashioned with plenty of warmth which highlights his playing and sublime saxophone tone. It is amazing to hear such a young line-up being able to produce such an accomplished and timeless-sounding record. Fans of saxophone-fueled jazz have much to savor on First Episode; the music flows smoothly like a gentle waterfall. Kokuryo's performances can be admired for their technical precision but there is much to appreciate here on a purely emotional level; he certainly plays with feeling.