BY WOODROW WILKINS
August 23, 2008
Sign in to view read count 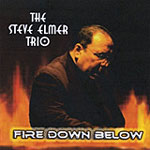 From banging on desktops to banging the keys, Steve Elmer has come a long way. Once rejected as a drummer for a school jazz band, he kept at it, honing his craft through formal education and ultimately turning to the piano.

Elmer and sidemen Shingo Okudaira and Hide Tanaka, began playing together just three years ago. However, after the popularity of I Used to Be Anonymous (self-produced, 2006), the trio was invited for a three-week, 2,500-mile tour of Japan. That paved the way for their second release: Fire Down Below.

"Sister Joan" is one of those songs that's good for the circulation. It's an energetic, playful song that features Elmer's piano throughout. Bassist Tanaka and drummer Okudaira add their own personal touches while staying mostly in the background. Tanaka delivers a solo on the elegant "Silhouette." Okudaira plays it light but crisp, working largely with the cymbals at times, delivering rim shots at others. Elmer's lead has the feel of classical piano while maintaining its jazz factor.

Another sizzling track is the cleverly titled "Constant Lee." A highlight of this piece is when Tanaka takes the bow to his bass. Okudaira's solo near the end of "Fire Down Below" is just one of several high points of this song. Again giving it an element of classical piano, or perhaps something more akin to Keystone Cops music, Elmer puts the keys through some blistering paces. Though no other instruments are present, the hotness of this tune at times suggests as if there are more than three musicians involved.

None of the tracks is extremely long, but the title song, at just under five minutes, is the shortest of the set. The trio has many opportunities to stretch out. All 10 songs are Elmer originals. Even when playing a slow- moving ballad, "Lasting Love," or an easygoing Sunday drive song, "Delicate Balance," the energy and vigor displayed by these musicians keeps Fire Down Below smokin' from start to finish.