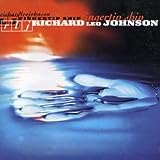 Self-taught and self-tuned, guitarist/photographer Richard Leo Johnson takes listeners on a thirteen-part voyage on his Fingertip Ship. Though he pays tribute to Jazz legends Tony Bennett, Stephane Grappelli, Django Reinhardt and Jaco Pastorius and explores the feelings of Pink Floyd and The Who, Johnson’s technique, style and delivery are unlike any other performer. Often hitting the frets without knowing exactly what "key" he may be in (if any), Johnson’s intuitive and idiosyncratic approach ranges from the delicate and spare to the blindingly frenetic.

Raised in the heart of America, Johnson explores classic and contemporary domestic moods as well as sounds of lands and times far distant, from the traditional Eastern koto-esque minors of "Empitsu No Uta" to the acoustically futuristic "Prometheus Meets The Digital Age." Though Johnson himself once presumed recordings of Leo Kotke and John McLaughlin to be the offerings of one person, it is hard to imagine in Johnson’s own case how ten fingers could produce so many intricate layers of sound. Despite a few selections revealing the impromptu nature of Johnson’s composition through occasional stutter and repetition, Johnson’s Ship sails on rather smoothly for most of the voyage.