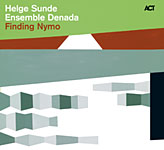 Its official CD release may have been on October 23, but trombonist/composer Helge Sunde's 2009 Enjoy Jazz performance on October 21 was an equally rare opportunity to hear his Ensemble Denada, a Norwegian big band that, not surprisingly, blends a healthy respect for the jazz tradition with more contemporary concerns. Performing the entire Finding Nymo CD, Sunde proved that the big band tradition is alive, well, and growing in the 21st Century. The CD, which features the same ensemble but with the added participation of Danish percussionist Marilyn Mazur, may be a slightly abbreviated version of what Sunde's German audience heard at the Alte Feuerwache in Mannheim, but it's no less compelling, with the benefit of the more controlled acoustic environment of Oslo's famous Rainbow Studio and its equally well-known engineer, Jan Erik Kongshaug at the soundboard.

The Norwegians may be the most creative integrators of technology into music, and Sunde makes that clear from the get-go, with the opening vocoder and electronics of "One Word" a perhaps deceptive opening to a set that's largely acoustic, and swings mightily. Bassist Per Mathisen and drummer Håkon Mjåset Johansen drive the entire set, whether it's the knotty "Obstler," viscerally swinging "When In Rome," or dark-hued "MoonCrier." Mathisen—a bassist well worth checking out—also solos with a stunning confluence of virtuosic detail and rhythmic intensity on "Bryk."

Sunde's use of the broad textural palette afforded by three trumpets, four trombones, and a mix of saxophones, flutes, and clarinets are striking throughout, whether brash and boisterous on the opening to "When In Rome," dark and colorful on the cinematic imagery of "Valse Trieste," or contrapuntally episodic on the somewhat Zappa-esque "Knegg." Astute and not at all compelled to utilize all his colors at once, Sunde also lets the music breathe during many of the solos, as on "Knegg," where trombonist Even Kruse Skatrud and trumpeter Marius Haltli trade-off with only the support of Mathisen, Johansen, and guitarist Jens Thoresen (whose solo on "When In Rome" is an appealing blend of post-bop sensibility with distorted warmth and a lazy, legato feel).

Most of the players are featured, but it's when two come together on the title track to engage in some friendly sibling rivalry—brothers Atle and Frode Nymo, on tenor and soprano saxophones respectively—that some of the album's most ambitious free play takes place. Atle also takes an extended solo on "Valse Trieste," another highlight; a lyrical blend of deeper indigo and, finally, blistering red as the ensemble swirls around him in a stunningly vivid arrangement.

Russian pianist Olga Konkova also contributes to the disc's blend of jazz tradition with broader stylistic concerns, with hints of contemporary classicism imbuing her solos on "MoonCrier" and the a capella opening to "Bryk." Together with the rest of Ensemble Denada, she brings Sunde's vivid charts to life on a set that's in turns exciting and poignant; a sign that the recent revival of large ensembles in North America is being mirrored with equal aplomb across the pond.